Arsene Wenger's decision to sign a new deal with Arsenal, a three-year contract which will see him at Emirates until 2011, will not only be a huge relief to Arsenal supporters but should come as no surprise.

For all Wenger's friendship with David Dein, the former vice chairman now at logger heads with the Arsenal board, there was little prospect of Wenger leaving.

For sometime now the powers that be at the Emirates have been confident that Wenger will sign.

That he may leave was, of course, their great worry after the acrimonious parting of Dein.

But I understand the prospects turned hopeful during the pre-season in Austria and in recent weeks the only bone of contention has been whether it would be a two-year or a three-year deal. 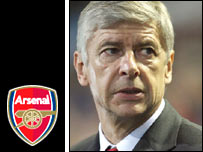 Now it is going to be three years.

There has been much speculation that Wenger has agreed the deal in response to Dein's decision to sell to the Uzbek-born Russian billionaire Alisher Usmanov, announced on 31 August.

But I understand it is likely to have been the other way round in that Dein was aware that Wenger had decided to stay and choose to sell and make it clear he wanted an Arsenal take-over.

The next three-and-a-half years until 2011 will prove very interesting for Wenger and Arsenal.

In just over two weeks' time, on 24 September, Arsenal are to announce financial results for last season - their first since the move to the Emirates Stadium.

The figures are, I am told, going to be very good and will give every reason for the Arsenal board to proudly state that their decision to borrow heavily to build a stadium to match Manchester United has been justified.

The next three years will be very important to Arsenal for many reasons.

Much has been made of Wenger not making any major moves in the transfer market. Money at Arsenal was tight whilst Emirates was being financed.

But I am told the manager had a pot of money to spend this summer and that it was left up to him to buy. In 2009 more money will come in.

That is when the development into flats of Arsenal's old ground at Highbury is likely to bring in £150m providing Wenger with an even bigger pot.

Wenger, of course, has been a shrewd mover in the transfer market. While there has been the odd duff purchase, this has been more than made up with his shrewd buying, particularly from France.

Wenger, it could be said, is building his third team at Arsenal and has clearly judged he can deliver still more success for the north London team.