Zimbabwe to remain in international wilderness?

Should Zimbabwe be allowed to resume Test cricket in November? Malcolm Speed, chief executive of the International Cricket Council, does not think they should.

I have seen a copy of his confidential report for this week’s ICC meeting in London, in which he says: "My personal view, shared by the cricket committee and ICC senior management, is that the game in Zimbabwe and, more widely, the rest of the cricket world, will not be well served by Zimbabwe resuming Test cricket at this stage.

“It is respectfully suggested that we must find other ways to assist cricketers in Zimbabwe".

The problems in Zimbabwe cricket are well documented, but most serious among them concerns the lack of proper financial accounting.

The two-day ICC executive board meeting which began at Lord's today has before it several papers on Zimbabwe.

One of them contains details of a forensic audit and is co-signed by Speed and Faisal Hasnain, the ICC’s chief financial officer. I have also seen a copy of this and its contents are quite devastating.

It summarises the concerns of the ICC board, felt since late 2005, about the “governance and financial accountability of Zimbabwe Cricket (ZC)".

The first relates to "a shortfall between funds that were agreed to be paid and the ultimate amount that was paid to ZC".

This matter is being investigated and Zimbabwean cricket is trying to locate individuals who were involved at the time and who have since left the board. 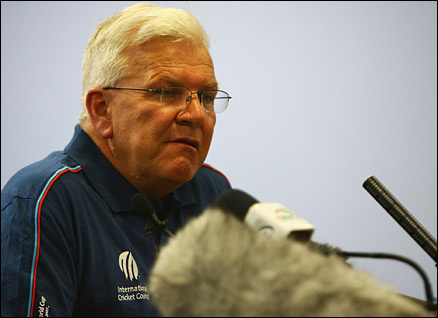 The second issue, the paper says, raises "greater concerns" about payments amounting to $640,350 to "three unknown companies" and is critical of Zimbabwe Cricket for failing to inform its auditors about this matter. Another issue concerns deals with a car company, worth $972,000.

It appears Zimbabwe cricket imported 60 cars that were then sold to the company in order to obtain extra local currency.

The paper says it is “impossible to establish” full details of the transactions, although “profits of some 239% were realised”.

They also report that "very surprisingly” after extensive correspondence, Zimbabwe Cricket advised its own auditors, Ruzengwe and Co, that they had not imported any cars or sold them.

“This is a complete about-turn by ZC and there is uncertainty here regarding these pseudo agreements as referred to by ZC. The auditors, Ruzengwe and Co, and ICC have been misled about these transactions."

Speed and Hasnain conclude: "It is clear that the accounts of ZC have been deliberately falsified to mask various illegal transactions from the auditors and the government of Zimbabwe.

“The accounts were incorrect and at no stage did ZC draw the attention of the users of these accounts to the unusual transactions."

So serious is the situation that, say Speed and Hasnain, "it may not be possible to rely on the authenticity of its balance sheet."

The report also says there could be serious breaches of ICC Code of Ethics and because of these various concerns, Zimbabwe has only been paid $2m of the $6, 511, 403 it is entitled to for taking part in the recent World Cup – just enough to keep its cricket going.

Speed’s report, which is to be considered by board members, also addresses various problems at the World Cup. He admits the tournament lasted too long, at 47 days, and that the next one in 2011 must be no more than five weeks.

Speed says the tournament suffered as a spectacle because India and Pakistan did not progress from their first round groups, because West Indies and England were "barely competitive" and because “there were very few outstanding, exciting matches."

The death of Bob Woolmer also "impacted heavily" on the competition, the opening and closing ceremonies were a "waste of money" and the final, which ended in darkness and will result in the umpires and match referee losing their $20,000 match fees, was a "fiasco", Speed admits.

He also feels there are too many one-day internationals played just to make money and that cricket needs to be cut back if it is not to lose its appeal.