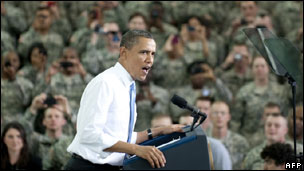 Even in the eyes of his critics, Barack Obama has made the transition from wimp to warrior president. One opinion poll had support amongst Republicans climb by 15%. Overall his approval ratings stand 11% higher than they did last month. There was the president riffing with the press at the annual White House Correspondents' Dinner last Saturday, while he had already ordered the mission that would end Osama Bin Laden's life and could have haunted his presidency, had it failed.

At one stage Seth Myers, a comedian, was joking that Bin Laden was not only alive but broadcasting in the early hours on C-Span. There were so few viewers that no-one had noticed. The president grinned a full set of teeth. As my friend David, a Republican lawyer, said: "Now that kind of nerve takes a cool cat."

It was a huge gamble, etched on the president's face in those now famous stills from the Situation Room. Notice also how the commander-in-chief sat hunched in the corner, while his war cabinet was watching the live feed of the raid, mouths agape. Other presidents would have sat at the head of the table, chest out, chin up.

Of course, since the kill Mr Obama has carefully staged his own victory lap. At Fort Campbell in Kentucky on Friday the banner Mission Accomplished might as well have been fluttering above the stage. And although most now pour scorn over George W Bush's fancy dress moment in the flight suite after the end of combat missions in Iraq, at the time just about everyone was impressed. With hubris in mind, Mr Obama has been treading a fine line. In the silence of the wreath laying at Ground Zero - to which he had invited Mr Bush - he found his voice once again.

His actions last Sunday speak louder than any words. Unlike the invasions of Iraq or even Afghanistan this was an act that needed no explanation or - for most Americans at least - justification. That in itself is a novel experience these days. Will the killing of Bin Laden end the war with al-Qaeda? No. Could it make it worse? Possibly. Could there be a violent reaction? Maybe. Will the end of Osama ensure Obama's re-election? Unlikely. Gas prices, jobs and housing are ultimately more important, as George H W Bush will tell anyone who asks. But I do predict one thing. The Donald won't have the guts to run for president now.