A candidate with guts? 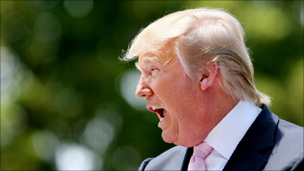 As a journalist, I am rooting for Donald Trump to plunge headlong into the presidential race. He will of course be entertaining. His hair will flop like a doormat in the chill winds of Iowa. It will labour and droop in the humid air of Florida. He will wave his fist, parade his beautiful daughters and smile about his wives. He will, no doubt, "fire" any number of real and imaginary foes, pick fights with the Chinese, squirm about his connections to Wall Street and tie himself into a few knots about why he called President Barack Obama "amazing and phenomenal" in his modestly entitled book, Think Like a Champion.

And of course Donald Trump has already had a campaign plane for years, parked at La Guardia airport in New York, with his short name in super-sized letters emblazoned on the belly.

Trump is a brand, a showman, an icon. But he is no joke. Karl Rove, that Machiavellian master of elections, got it wrong. Trump may never even get close to owning that once renewable lease on the white house on Pennsylvania Avenue. But he represents a chunk of this country that yearns for a blunt-speaking, successful man to take America firmly by the hand and slay its various dragons.

Trump is from the gut, as George W Bush used to like saying about himself. And "guts" is something in relatively short supply if you look at the current line-up of Republican contenders. Mitt is cerebral with almost extra-terrestrial perfection. You're afraid that if you pinch him your finger will glow. Tim is too nice to be truly of the gut. Mike's guts are diluted by his sense of humour. Newt only does bespoke gut. That leaves the potential women candidates, Sarah and Michelle. Plenty of guts there, for sure. As they used to say about Margaret Thatcher: "She's the best man we've got."

The point about The Donald's flirtation with presidential politics is that he sees America's deep rut of self-doubt as an opportunity. The Republican Party is scrabbling around for a suitable candidate like perhaps never before. This is a party in search of itself. The old genteel rule of allowing a dauphin to rise to the helm no longer works. These are ranks fraught with insurrection. It's a bit like the Apprentice. Anyone can have a go. Guts will not be the only quality that a successful candidate needs. Sound judgement, clear policies and money also help. The Donald has at least one of the above.