Is it time for intervention in Libya?

The hand-wringing in Western capitals about whether or not to impose a no-fly zone over Libya is in sharp contrast to the resolve in Gulf capitals that this is the right thing to do and the very least the outside world can come up with to prevent Col Muammar Gaddafi from using aerial bombardment to cling to power.

I know that the Libyan air force is not inflicting most of the damage. Col Gaddafi has plenty of tanks at his disposal to roll across the desert. A no-fly zone may have a limited impact. But it would send the right message to the people of the region hoping their gains won't be forgotten, and to any rulers weighing up the Gaddafi approach to crowd control. It would weaken the resolve of those parts of the Libyan military that are still loyal to the colonel and it would ensure that Washington is - at the very least - practising what it preaches.

If Col Gaddafi's forces continue to hammer the rebels and prevail while Washington stands by and watches, this president will never be able to deliver another Cairo speech without becoming a laughing stock. Some revolutions are homegrown, domestic affairs. Others need a little help from outside. Nicholas Kristof, an opponent of the Iraq War, has an interesting article in the New York Times calling for greater intervention.

The casualties in Libya may still be relatively small compared to Rwanda or Bosnia. But I covered the Yugoslav wars and watched as Western dithering, justified by lessons from the boggy history of the Balkans, led to 200,000 or more unnecessary deaths. Let's hope that history does not repeat itself.

The view from Capitol Hill 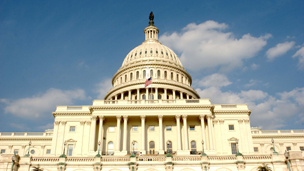 The winter sun is blinding. The air is cold enough to freeze nasal hairs. It should have been a wonderful March day in the nation's capital and yet I have had one of the more interesting and sobering lunches with a Capitol Hill grandee. This man, not exactly a wilting flower, was deeply perplexed by America's imminent future.

His take: the turmoil in the Middle East had reduced the superpower to grappling observer status. The options on unseating Col Muammar Gaddafi were extremely limited. The economy was sputtering at best. Afghanistan was the wrong war, and worst of all the deficit was so huge it had pushed America close to the cliff's edge. If we don't fix this, Uncle Sam will be pushing up daisies in three years from now. This is make or break, he said, between mouthfuls of ricotta ravioli. I used to worry about my children and grandchildren. Now I worry about myself.

How to fix this? Slash social security and other entitlement programmes. Don't raise taxes. If President Barack Obama showed real leadership in this crisis - that is, forced the bitter pill of British-style austerity down American throats - he would be a sure winner in his re-election bid next year.

But in Britain, the top tax rate is 50% and austerity was never a rallying cry. It was imposed after the election and it has yet to reboot the economy as promised. I can't see anyone getting elected in America on the promise of hardship, however acute the debt crisis.

A lot has been made of how US policy towards the Middle East has been flummoxed by events in the region. Even as there is fighting talk of no-fly zones, frozen accounts and military "assets" being shifted around the Mediterranean, you can still hear the collective shrugging of shoulders about how exactly to recalibrate policy towards turmoil.

But what do the policymakers, strategists and spin-meisters in the caves of Waziristan make of all this? Al-Qaeda has just had its cause stolen by ordinary people on its own turf thirsting for freedom and using something much more explosive than an IED: the determination to have their voice heard and break free from fear.

The groundswell of humanity has been far more effective in removing autocrats who have been poodles to the West and rottweilers to their own populations than the lunacy of suicide bombs.

After occupying centre stage since 9/11, al-Qaeda has been rendered off, off Broadway in this global drama. It may still benefit from future chaos, but for now it is Col Muammar Gaddafi and his henchmen who look and act most like the enemy the West has relied on them to lock up.

Yesterday, the delusional leader was telling the world how his people loved him and how "al-Qaeda, al-Qaeda" was fomenting unrest and slipping drugs into his people's milk. It was Col Gaddafi's Charlie Sheen moment.