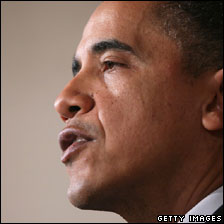 Barack Obama looked supremely happy making his speech on the exit of Egypt's President Hosni Mubarak. It was not just that he could complete the one he had started prematurely yesterday. It was not just that, despite all the brickbats that have been thrown at the White House for clumsy handling of this crisis, the administration has got exactly what it has wanted for a couple of weeks: the exit of Mr Mubarak, the entry of the military as caretakers, the promise of democracy, and the absence of violence.

It is more personal, and more political than that. Maybe it is the old community organiser in him, maybe it is the admiring, almost envious, student of the great civil rights leaders, but something tells me few things light him up more than seeing ordinary people overcoming obstacles to seize their own future.

This triumph allowed Mr Obama to revert to the visionary candidate of the campaign, as he did in Tucson after a tragedy.

When he talks about the "moral arc of the universe" you know he is in his element. This is what he is best at. Weaving a selection of facts into a simple story that builds into a grand moral narrative that speaks to his greater vision. He instantly cast the Egyptian revolution as part of a pattern.

"While the sights and sounds that we heard were entirely Egyptian, we can't help but hear the echoes of history - echoes from Germans tearing down a wall, Indonesian students taking to the streets, Gandhi leading his people down the path of justice. As Martin Luther King said in celebrating the birth of a new nation in Ghana while trying to perfect his own, 'There is something in the soul that cries out for freedom.' Those were the cries that came from Tahrir Square, and the entire world has taken note."

The leader of a country and a capital deeply split on vicious partisan lines could talk of people coming together, despite their differences, in one cause:

"We saw people of faith praying together and chanting - "Muslims, Christians, We are one." And though we know that the strains between faiths still divide too many in this world and no single event will close that chasm immediately, these scenes remind us that we need not be defined by our differences. We can be defined by the common humanity that we share."

The commander-in-chief of the most powerful military the world has ever known could talk of the power of non-violence:

"Egyptians have inspired us, and they've done so by putting the lie to the idea that justice is best gained through violence. For in Egypt, it was the moral force of non-violence - not terrorism, not mindless killing - but non-violence, moral force that bent the arc of history toward justice once more."

This day of history brings many years of potential problems for this president and those beyond him. The army will probably embark on the sort of reforms people want, but that is not certain. In free and fair elections, the Egyptian people will not necessarily choose leaders who are friendly to the West or to Israel. Other Middle Eastern autocrats may not be delighted at the thought that Mr Obama might want to bend the moral arc of the universe in their direction.

But there is opportunity between these potential problems. Film stars can adopt foreign orphans, Mr Obama has adopted a foreign revolution, and with it a foreign policy narrative that allows him to restate his core manifesto of inspiration and unity.