The failure of an industry 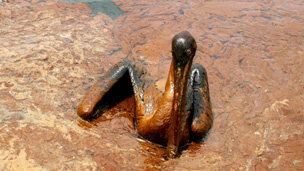 It is just chapter four, the concluding chapter that has been released of the presidential commission's report into the oil leak in the Gulf of Mexico.

Much of it is deeply technical, and it takes me at least a couple of readings to sort out my spacer fluids from my annular preventer. But the authors intentions could not be clearer.

The opening is worthy of any British tabloid. A picture of the inferno, a core as bright as the sun, surrounded by scarlet flames and billows of black smoke. In bold type a headline, a quote from an email by one of the engineers involved in putting the rig in place: "Who cares ... it's done ... end of story ... will probably be fine."

This is perhaps rather unfairly taken out of context. It suggests a cavalier approach to the whole job. In fact the man was talking about a specific and rather technical dispute about how many, and what type of centralisers should be used. Perhaps he's saying: "There's more than one way to skin a cat." Except of course the cat wasn't skinned.

The detail is devilish, but worth following.

These devices are apparently crucial to guide the concrete that should block any gaps and so stop oil and gas leaking. First they were going to use six. Then they decided they needed 15 more. Then when they arrived they weren't of the type ordered. So someone else decided to go with just six.

But it turns out they might have in fact been the right sort. The report argues this, and many other examples show a rather slapdash approach - BP wasn't sitting down and thinking this through in advance (remember we are not talking about crisis management here, but the installation of the Deepwater Horizon).

The report says the disaster happened not because of a series of aberrations by rogue operators but a systemic failure of management. And that means it could happen again.