President Obama spoke to a unique audience, Republicans and Democrats sitting side by side. This was a first, a deliberate symbol of unity after the shooting of their colleague Gabby Giffords and the murder of six people in Arizona. It was as strange as it would be to see Labour and Conservative MPs sit side by side in the House of Commons. 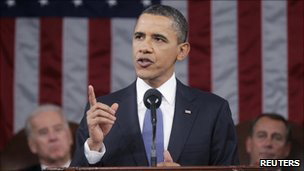 But the president hardly grasped the moment. He of course referred to it. He said: "What comes of this moment will be determined not by whether we can sit together tonight, but whether we can work together tomorrow."

But he did not dwell on it. He did not have much to say about the shooting. The call to work together was there, but he didn't harp on about it.

There were examples in the speech of areas where compromise might be found (on a good day with a fair wind). Tax reform. Illegal immigration. Of course the five year freeze in spending. But these themes were not pulled together into anything remotely resembling an agenda.

Most commentators see this speech as a move to the centre which leaves him well positioned with the electorate. Maybe they are right. But what struck me was how defiant it was, how much it was a defence of Obama's central political beliefs.

He has apparently been reading Reagan's speeches and attempted something approaching sunny optimism.

We are poised for progress. Two years after the worst recession most of us have ever known, the stock market has come roaring back. Corporate profits are up. The economy is growing again.

But he seemed keen to move on to a lecture on the challenges posed by technology and globalisation. Some on twitter have compared it to the book "The world is flat".

He choose as his motif America's new "Sputnik moment". The first was when the USA was jolted and jarred by the Soviet Union's success in becoming the first nation to put a satellite in orbit around the Earth. But America went on to land on the moon and win the space race. Some will read Obama's message as simple as some of his best lines: "We do big things" or "the future is ours to win". A vision of an America that can and will pull itself up and score another great victory. That may be how some hear it, and it will appeal to an American sense of mission, optimism and will to win.

But the behind these ever popular themes was a staunch defence of Obama's economic principles. He was saying the space race was won because of government investment in education, innovation and research. He went on to talk about investment in crumbling roads. High speed rail. Bio tech. In other words the sort of spending the Republicans want to trim. Oh yes, he proposed cutting red tape, slimming down government and so on, but he also had a warning.

I recognize that some in this chamber have already proposed deeper cuts, and I'm willing to eliminate whatever we can honestly afford to do without. But let's make sure that we're not doing it on the backs of our most vulnerable citizens.  And let's make sure what we're cutting is really excess weight. Cutting the deficit by gutting our investments in innovation and education is like lightening an overloaded airplane by removing its engine. It may feel like you're flying high at first, but it won't take long before you'll feel the impact.

At that the Republican speaker John Boehner, sitting behind him, managed to puff a little air from his lips. Not a laugh exactly, more a representation of one.

The State of the Union tends to be seen as an important speech, but in some ways it is a diary date, rarely a turning point. It was a little flat, and certainly didn't soar in the way his speech at the memorial service in Tucson did. Perhaps it never could, or should. I don't yet know whether it will receive the near universal praise from American pundits that that speech did, but I rather doubt it. What was striking, despite the calls for unity, despite the mild almost academic language was the sheer defiance of the speech in terms of the central question of Government spending. Obama did not so much reach out to find hands across the aisle as throw down a gauntlet.