Why is the Tea Party boiling? 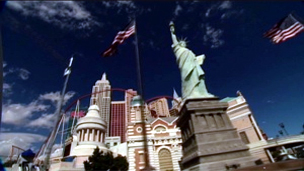 A forlorn yellow balloon is trapped by the sky, unable to rise any further. It's stuck, against the deep blue heavens and the fluffy white clouds. Gondolas circle St Mark's Square below. It's a very American illusion. For I am in one of Las Vegas' palaces of dreams, the huge Venetian hotel where a narcotically-vivid sky has been craftily painted on the vast ceiling which arches way above my head.

The hotel casino seems busy enough, music blaring and lights glaring, but like the balloon the city's economy nowadays has trouble rising to its accustomed heights. Those of a censorious disposition might find it fitting that this city, devoted to the illusion of sudden undeserved wealth, is nestled in the desert embrace of Nevada. This state has the unpleasant distinction of having the worst-performing economy in the US. 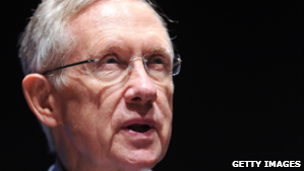 This is why the leader of the Democrats in the Senate, Harry Reid - a Nevada senator for 24 years - may well lose his seat when America votes on 2 November. It's a fate that may befall many of his less illustrious colleagues as well.

For Nevada is not alone. All over the United States, you pass the depressing sight of boarded-up homes and businesses. A recent government report showed the recession ended in the summer of 2009. All over the US I have heard the same baleful joke: "Shame no-one told the economy!"

"It's the economy, stupid" is perhaps the most overworked cliche in politics. But it still counts as an insight here because politicians, particularly those on the right, have often focused on cultural issues - abortion, guns, homosexuality, evolution, Islam - instead of the bread-and-butter ones.

But the Republicans may capitalize on the mood of economic unease because of the boiling enthusiasm of the Tea Party movement. Its members have a sense of anger, a disgust that they've been let down and a near-absolute distrust of government. And they know it's the economy, stupid.

This vibrant, anarchic and furious ginger group of conservatives has pushed the Republican Party to adopt their people and their policies. One activist did not demur when I compared their tactics to Trotskyites who attempted to take over the British Labour party in the 1980s. "Exactly," he said. And when you look at them gathered for one of their big rallies, with their hand made placards, they can look, well, a bit nutty - their opponents, of course are eager to make them look complete fruitcakes! But they are more serious than that.

The core of what the Tea Party is about is smaller government, less spending and as a consequence, lower tax. But it is Big Government that is the real enemy. It isn't just the bad policies but a feeling that government here in itself is almost evil, an assault on freedom. So here there is a great paradox: a movement that boasts its theoretical love of America and democracy but which hates its real life institutions. It's not their fairly mainstream economic theories I strain to understand, but the passion; a passion which means that political discourse has become increasingly uncivil, filled with vitriol and abuse.

So why is the Tea Party boiling?

Some say it's racism. Those I've met are not racist but I do wonder if for some there's a sense of lost superiority. For all their lives there's been a white man in the White House. It's not just that Obama isn't in this image, he does not fit any stereotype of a black person that they know. Cool, cosmopolitan, calm and aloof. There is a sense of disconnect for what ought to be their view of the natural order.

A woman who told me that Obama was a socialist and her country was sliding into Marxism said when he was elected president she drew the curtains for three weeks and couldn't answer the telephone. Only the Tea Party saved her.

America is changing fast and some in the Tea Party people don't like the loss of the assumption that white, European, 1950s America is the norm, the benchmark.

Americans bang on a lot about being American. There is an intense patriotism, a belief the United States has a unique place in the world and that its actions have (just about) always been for the good. 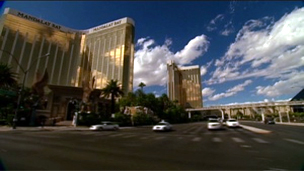 There is perhaps today a somewhat puzzling lack of self-confidence in this, the richest and most powerful country the world has ever known. Perhaps it is because, for many, it is a country that was born with a purpose, a mission, a dream. And if their particular notion of that dream is questioned, it feels as unnatural and artificial as that Venice sky in Vegas, stopping the yellow balloon from rising.

The British can look far back into their past history, to Alfred the Great, perhaps, or even King Arthur but American history has very shallow roots. To the rest of us, America looks robust, but American conservatives believe they are nurturing a fragile dream. The American novelist of the moment, Jonathan Franzen, perhaps sums it up aptly in his new
best-seller when he says: "The personality susceptible to the dream of limitless freedom is a personality also prone, should the dream ever sour, to misanthropy and rage."

You can listen to the audio from my visit to Las Vegas on the BBC's From Our Own Correspondent page.