Tea Party not so mad 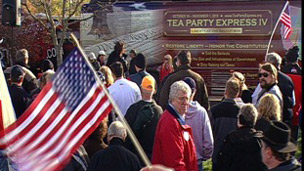 "He's just trying to pretend there's as much enthusiasm for the other side. But it's not true."

That was the sentiment of the lady who'd been hooting and hollering next to me as if she were at a revivalist meeting - booing the mention of labour unions, cheering the constitution.

While people gathered in Washington DC for comedian Jon Stewart's "march for sanity", I was with some of the people he tries to mock.

The rally in Lane Road Park, just outside Columbus, Ohio, was rather smaller - about 200 people - but then there were no superstar entertainers on display.

We'd all gathered as three buses from the Tea Party Express rolled into the car park. The organisers hadn't been able to tell me if Sarah Palin would appear as originally advertised. She has apparently grown rather capricious when bestowing the favour of her presence.

But if the crowd were disappointed at the no-show, they certainly didn't show it, gathering in front of the bus and whooping "Freedom" before settling down to listen to speakers, including Diana Nagy, a Christian country singer in high-heeled boots who out-Palined Palin with a swooping, giggling delivery of political punchlines. Unlike Sarah Palin she also gave a solo performance of the national anthem, with heavy emphasis on the line "one nation under God" and less politically explicable weight on the word "stars".

This is a movement that tends to easily embrace martyrdom and the sense of being got at by an elite. Stewart won't hurt their self image.

The main speaker said: "Our name is being dragged through the mud, that we're violent racists." The all-white crowd cheer or just nod. I have never seen any overt racism at a Tea Party rally and don't today.

Most I spoke to never watch Jon Stewart and they didn't care very much about the rally. One man who'd just told me Barack Obama was a communist said: "I don't know who he is but if he says we're nuts he's a liar."

Well, maybe Stewart doesn't quite say that, but plenty do, and one Washington Post columnist recently pulled together the inanities of various Tea Party candidates.

What is interesting about this is that most of the odd things that have been said by Sharron Angle and Christine O'Donnell date before the current race.

The struggle of those in charge of the Tea Party, if anybody can be in charge of something so hydra-headed, is to put the focus on fiscal conservatism and the constitution and not get caught up in social issues. This can prove very difficult. One man carries a banner: "Speak for yourself Obama, we are a Christian nation, we are a Christian nation, whatever Obama says". A T-shirt has a list of 10 principles, covering the constitution, the budget and ending up: "I believe in Jesus Christ as my saviour". I am sure many Tea Party supporters would endorse all 10 sentiments, but if they try to broaden their agenda, they will narrow their base.

Over the past year I have spoken to many supporters of the Tea Party and been to lots of rallies. I have spoken to people whose characterisation of Mr Obama and his aims seems to me way off beam, a cartoon enemy conjured from some 1950s nightmare. Some believe the constitution tightly constrains the sort of economy America must have, and that only they can define what is properly American.

There is a wide-eyed enthusiasm that is easy to mock. But talk to people for more than a few minutes and fury tends to dissolve into concern, worry about the economic direction of the country, worry about the size of the government and the level of taxation. They're mad as hell, but that doesn't make them crazy.