Is there a Palin pattern? 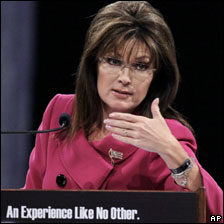 Mama Grizzly-in-chief's every growl and swipe will be watched in Iowa for signs when she'll bite. Sarah Palin is speaking at the Iowa Republican Party's main fundraiser, the Ronald Reagan dinner ($100 a ticket, $1,000 for a table). Iowa is traditionally the first state a would-be presidential candidate has to win and the caucus on 6 February, 2012, will be an important moment. So will she? Won't she?

Well, she won't and she will. I'm not holding my breath for any newsworthy announcement today. But it's all just part of the political striptease that keeps us bug-eyed, leaning forward on the edge of our seats. As I have written before, I do not have the slightest doubt that she will eventually reveal all and make a pitch to be the Republican presidential candidate in 2012. I am not alone. But here are some other views.

She's already half-way there. It is one of the peculiarities of American politics that there is no official leader of the opposition for most of the political cycle. By dint of personality and popularity the leader of the House, or the Senate or the party chairman could be seen as the most important Republican figure. Often there is no-one of that stature. But it is Palin who has made herself the leader of, not just the opposition, but the Republican resurgence.

She is the star speaker Iowa Republicans wanted for their big dinner. She has made the primary season her triumph, anointing or withholding love. She has, along with the Tea Party movement, pushed her party to the right. And, yes, it is she who fascinates many in the media, including me.

Part of her appeal to Tea Party people is the cultivated image that she is guileless, gee golly gosh, not like those calculating politicians in Washington, she just tells it straight, readin' off her little ole hand, not them fancy teleprompts.

She told Fox News this week that she wasn't trying to be a kingmaker. "I don't even know how to play those type[s] of games. And I don't have the people, the machine, the whatever-it-takes to be in a position like that."

As she is a well known fan of Shakespeare, or at least his conjuring of new words, I would say: "Me thinks she doth protest too much." And there is at least some evidence to refudiate her protestations.

She hasn't exclusively endorsed Tea Party candidates against the establishment. Certainly she has in Alaska, Nevada, Delaware and Kentucky to name but a few states. But in New Hampshire, where the vital first primary is held, she did endorse the winner of the Republican race, but not the most conservative candidate, not the Tea Party favourite. The same goes for California and Arizona. Is she cleaving closer to the Republican establishment in big, winnable states? I am not sure if there is a pattern or not.

If she is silent about her intentions, is her cash talking? Out of the $866,000 raised by her political action committee in three months, she has given $87,500 to Republican candidates in this year's election. Some 11% of the money went to Iowa, but one of the biggest sums, $5,000, to the man running to become Republican Governor of Ohio. She also gave money to other key players in that state, which is often seen as a presidential decider.

When, in a different incarnation, I was covering a rather less important presidential campaign, that to become first President of the European Commission, I was told repeatedly by wise old birds: "The front-runner never wins." In America that doesn't seem to be true. The front-runner has an advantage. But there is a long way to go. If Sarah Palin's more right-wing picks, in Delaware and Nevada, fail to knock vulnerable Democrats off their perch she will take some of the blame. But I suspect we will be seeing her in Iowa a few more times in the next couple of years.