The day after President Barack Obama's big speech announcing more spending to create employment I am in the Verdugo Jobs Center in California, which serves an area with a population of about 330,000. 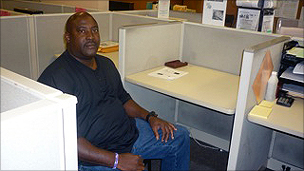 Eric Thomas has been unemployed for nine months. He's a welder who has retrained as a forklift truck driver.

He is ambivalent about the president's plan. He thinks updating the rail lines is a good idea and might provide work for him, but he says he is against the idea of building for the sake of building and worries that any jobs created will not last very long. What happens then, he asks. What he wants is some stability and a permanent job.

Talking to people in the centre is a reminder of how different America is to Britain. Mr Thomas' unemployment benefit ran out some time ago, and he's now living off his savings.

A woman named Carol who is in her 50s tells us she has been out of work for six years and can live on her savings for another two before it will all be gone. She doesn't know what she will do then and worries about becoming homeless. 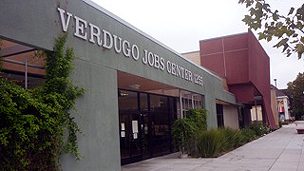 This centre itself has been helped by stimulus money, getting about $3m to boost its training staff. The cash will run out next year, but the manager says they need it more than ever. She says the economy is picking up a little but more and more people are chasing the few jobs that do come up. People with college degrees are looking for two or three jobs so they can pay the mortgage. She would welcome more stimulus money but thinks it would be best spent on giving tax credits to employers who create new jobs.

Annie Birthistle has been searching for work for two years. She too relies on her savings, plus some money from her parents.

She is a health care worker who looks after older people in their own homes. She finds with the recession some families are tending to look after their elderly relatives themselves rather than pay for outside help. She seems vaguely in favour of spending to stimulate the economy, but, like Mr Thomas, is more concerned about the ends than the means. I ask her what she would say to the president if she could talk to him.

This is at least one of Mr Obama's problems. Some of the people most deeply affected by the recession no longer feel that he understands their plight, they do not care much about the detailed arguments about stimulus and tax cuts, but just want the outlook to improve.