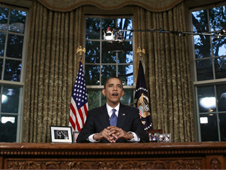 It is a sombre moment when the American president addresses his nation from the Oval Office. Hands clasped before him, Barack Obama summoned the imagery of war. He talked of a "battle plan", oil "assaulting the coast", "a siege" and a promise to capture 90% of the oil soon. He underlined the sense of gravity, the sense of the challenge he was dealing with.

"Already, this oil spill is the worst environmental disaster America has ever faced. And, unlike an earthquake or a hurricane, it is not a single event that does its damage in a matter of minutes or days. The millions of gallons of oil that have spilled into the Gulf of Mexico are more like an epidemic, one that we will be fighting for months and even years.

"But make no mistake: we will fight this spill with everything we've got for as long it takes. We will make BP pay for the damage their company has caused."

If this was a war, there is no doubt who is the enemy. A recent opinion poll suggested more than 70% of Americans thought Mr Obama not tough enough with BP. He wasn't letting that go unanswered.

"I will meet with the chairman of BP and inform him that he is to set aside whatever resources are required to compensate the workers and business owners who have been harmed as a result of his company's recklessness. And this fund will not be controlled by BP. In order to ensure that all legitimate claims are paid out in a fair and timely manner, the account must and will be administered by an independent, third party."

He promised to heal the Gulf and to find out what caused this disaster. One problem was a lack of an alert watch-dog, and he took swipes at the Bush administration and his opponents' view that government is always the biggest problem. The symbol of failure: the Minerals Management Service, which would get a new boss, a tough former prosecutor.

"Over the last decade, this agency has become emblematic of a failed philosophy that views all regulation with hostility - a philosophy that says corporations should be allowed to play by their own rules and police themselves. At this agency, industry insiders were put in charge of industry oversight. Oil companies showered regulators with gifts and favours, and were essentially allowed to conduct their own safety inspections and write their own regulations."

Accused by some of being too passive, of not dealing firmly enough with BP, basically with not taking charge, Mr Obama admitted only to not moving fast enough to deal with that agency. But then his big political push: not letting a crisis go to waste, as a top aide once said of the financial meltdown. The president said the tragedy was a powerful and painful reminder that America used 20% of the world's oil and had only 2% on its own soil. The switch away from carbon fuels could not be a distant vision.

"The one approach I will not accept is inaction. The one answer I will not settle for is the idea that this challenge is too big and too difficult to meet. You see, the same thing was said about our ability to produce enough planes and tanks in World War II. The same thing was said about our ability to harness the science and technology to land a man safely on the surface of the moon. And yet, time and again, we have refused to settle for the paltry limits of conventional wisdom. Instead, what has defined us as a nation since our founding is our capacity to shape our destiny - our determination to fight for the America we want for our children."

It was a measured, sober speech of quiet power, the speech of a president projecting absolute command, if not empathy. But the last quotation says much: a strong, very American invocation of the country's might and optimism, its ability to muster its strength and overcome.

It was intended to rally a people who were rather feeling he'd not gripped this crisis. He gripped this opportunity, at least, and White House officials will hope they are right that this is an inflection point, a crux where negative becomes positive.