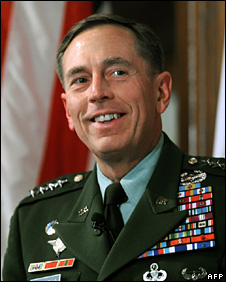 For once, a Senate hearing may just generate light rather than heat.

The senators hero-worship the super-fit intellectual warrior (aren't they all these days?) Gen Petraeus and the chances of them blocking his appointment to the top military job in Afghanistan are just about nil.

But what he tells them will be interesting.

I've got little doubt President Obama wants to be on something like a five-year track to withdraw combat troops from Afghanistan.

At the end of the G20 summit in Canada I asked British Prime Minister David Cameron whether he had meant to say British troops "can't" be in Afghanistan in five years. His answer was robust. He meant what he said, and stressed the next two years were vital.

In his news conference President Obama was asked if he agreed with this timetable. He didn't quite come out and say "yes" but he said this was now America's longest war.

He urged people to have a little optimism, said he was expecting the strategy to work and observed that every target for withdrawing from Iraq had been hit.

So his answer boils down to a hope that in the near future the Taliban will be licked, Afghan forces will be in good shape to take over, and the withdrawal that will start next summer can accelerate.

But senators will want to know what happens if the president is not right. Will the general ask for more troops to finish the counterinsurgency job?

Or will there be a point where the strategy is judged to have failed and there is a move back to the vice-president's preferences for a counter-terrorism strategy (hit the bad guys, rather than build an environment where they can't thrive).

Few are likely to be as bold as academic, Daniel Drezner. Writing in Foreign Policy he suggests that the current threat from al-Qaeda is simply over-exaggerated but there should be a lively debate about what happens next.