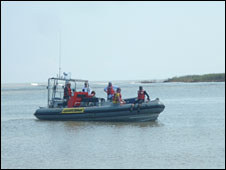 I am in a Greenpeace boat thundering down the muddy Mississippi in search of the river's latest unappealing shades of brown. The jet boat jumps and thumps past the dredgers and tugs, past the lighthouse at South Channel, where they're storing booms and Hazchem suits to tackle the spill in the Gulf of Mexico.

The guide for our tour is Paul Horsman, Greenpeace's man in charge of oil spills, a marine biologist by training.

Our first sighting is on a tiny beach with just a lick of sand. On it sits about an 8ft (2.4m) smear of deep metallic red, the colour of a New Orleans Sazerac cocktail. But the coast-guard arrive in their fan boat and tell us to move away. "You can't land!" they hail us. We don't want to land, just to film. They move their boat in between us and the beach so we can't. It's the best stroke of luck we have.

Forced to move off, we go towards a line of rocks and artificial jetty, designed to keep debris from the open sea drifting into the shipping land. It is spotted with splotches of light brown stains. 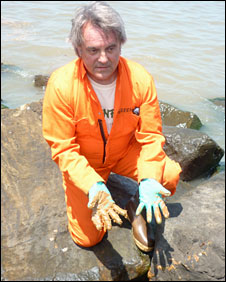 Paul Horsman, wearing an orange jumpsuit, wellies and blue gloves, is soon down on his hands and knees, scooping up great globules of the stuff from between the rocks. It looks as if he's dipped his hands into melted chocolate.

"What I've got in my hands is some of the oil, it's very thick, it's very fresh, it's viscous material. It's a clear indication it is spreading. We are working at the fringes of knowledge here. You know, we have a 40-year history of working with oil spills. We know they have a long-term impact on the environment. As far as this one is concerned, it's the first time it has spread in such a wide direction in such deep water. I would say there is a massive experiment going on in the Gulf of Mexico, the results of which we have no idea."

Just before heading back, we investigate another beach on the tiny strip of coast line that accompanies the Mississippi all the way to its final destination. As before, there are splashes and patches. As we get close, we can see globes and tendrils of brown stuff floating in the ocean, like refugees from a lava lamp. Then the Greenpeace cameraman, Carlos, starts shouting: "There, over there: there's masses of it, can't you see?" Sure enough, behind the tall reeds, there are splashes of oil trapped in a pool, a rich dirty gumbo dripping down the sandy bank. It is what we think is the first landfall of the liquid crude.

Greenpeace, of course, is a pressure group, and they want people to switch away from carbon-based energy. They are using this accident to campaign for their wider cause. But does Paul Horsman think this accident really is a game changer?

"In an era where we are meant to be switching away from fossil fuels, the fact that the oil industry is encouraged by governments to expand into the frontiers, and when you are pushing the frontiers like the deep oceans, like the Arctic, like the tar sands in Canada, you are going to have accidents. It is time that the oil industry and government recognise that we have to shift away from fossil fuels. You don't get oil spills from wind farms."

A colleague asks a good question: the Three-Mile Island accident put an end to the expansion of the nuclear industry for a generation. Is this comparable? Paul says that it's different: people want to be able to switch the light on, they don't care where the power is coming from. If they want to fill up their SUV, it has got to be oil at the moment. So I ask him if his aim is realistic.

"No-one pretends that the oil is going to switch off tomorrow. We are going to have to use oil in reduced amounts over the coming years, and one of the ways to get to the reduced amounts is to push the oil industry to say, so far and no further, this is one drill too far."

For all the sound and fury from the Obama administration, there has been no definite change of heart about deep-sea drilling, no recantation of his move closer towards the Sarah Palin "drill, baby, drill" attitude in January's state of the union. We still have to see whether spill, baby, spill will make a difference.