A first triumph at the nuclear summit

Outside the conference centre two marines do duty as traffic cops, stopping cars and lorries and waving them on.

A police car blocks the next street, and a trailer from Homeland Security's emergency response unit is parked alongside. A ring of big trucks provides further discouragement to would-be car bombers. The high security is understandable. The prime ministers and presidents of 40 countries are inside. 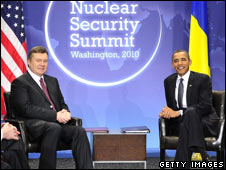 But all this high security would be blown away like paper in the wind by what President Obama is talking about. A nuclear bomb set off by terrorists. He says it is the highest threat to US security.

Of course film makers and novelists have long made us shiver at the sheer thought of such a possibility, and the whole perception of the danger of weapons of mass destruction after 9/11 led us into the Iraq war.

But perhaps some threats seem too much like fiction to be taken seriously. According to a poll by US network ABC, only 12% of Americans agree with their president that it is the biggest threat to their country.

President Obama appears to worry that other world leaders are just as complacent. Guarding or removing highly enriched uranium and plutonium is often seen as rather technical, almost geeky.

This summit is intended to give the world a signal that the president doesn't see it that way.

For him, it is an urgent political priority.

The carefully choreographed announcement that Ukraine is giving up its highly enriched uranium (HEU) is a first triumph. Expect more.

But I wonder if this is a danger that can ever really be eliminated.

More tomorrow, but thanks for all your good wishes for Easter (it was terrific), and nice comments about the eggs.

And I'm glad to see you can keep a discussion going without my prompting!