Trying to work the old magic

President Obama has made a passionate, personal appeal to House Democrats. We all expect they will meet and vote on health care on Sunday, although there has been no official announcement as I write.

He used the word "tough" half a dozen times at least in the speech. It was the most personal speech I have heard him make since I came here last summer and I imagine will remind many of the election campaign. He told congressmen and women in the House of Representatives: 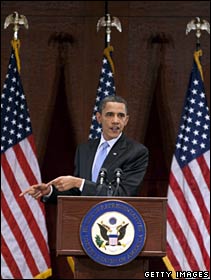 "I didn't think of myself as a potential politician when I got out of college.  I went to work in neighbourhoods, working with Catholic churches in poor neighborhoods in Chicago, trying to figure out how people could get a little bit of help.  And I was sceptical about politics and politicians, just like a lot of Americans are sceptical about politics and politicians are right now.  Because my working assumption was when push comes to shove, all too often folks in elected office, they're looking for themselves and not looking out for the folks who put them there; that there are too many compromises; that the special interests have too much power; they just got too much clout; there's too much big money washing around."

I am just reading "Game Change", the recent book on the presidential election, and it stresses how much Obama missed his family while on the campaign trail and the strains that being a politician took on that part of his life. The authors report that his staff knew he was going to run when he missed an important event for his daughter to go to a fund raiser. So, perhaps this was from the heart:

"A lot of us have been here a while and everybody here has taken their lumps and their bruises.  And it turns out people have had to make compromises, and you've been away from families for a long time and you've missed special events for your kids sometimes.  And maybe there have been times where you asked yourself, why did I ever get involved in politics in the first place?"

I am not sure any last votes will turn on this. I don't believe there will be a vote unless the Democratic leaders think it is in the bag. But Obama is trying to work the old magic, the ability to connect, that made him think he could be president in the first place.