Can China-US relations only get worse? 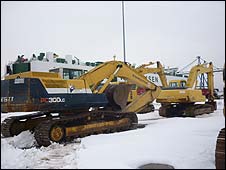 Lines of Chinese diggers destined for American building sites stand in the snow in Baltimore docks, just unloaded from a hulking ship.

The giant container cranes move steadily down the dockside unloading the metal boxes.

"The green ones are from China," says Mark Montgomery, senior vice-president with Ports America. There are lots of green ones. Around 300,000 of them every year.

Baltimore's port does more business with China than with any other single country, and that business is growing.

Perhaps that is not surprising: this year China replaced Germany as the world's largest exporter. Last year a second shipping service doing business with China opened up at the docks and privately Mark Montgomery thought one of them would struggle. They are both doing well.

He has seen all the speculation about worsening relationships with China but is emphatic that it has not harmed trade. 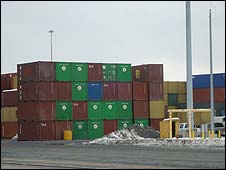 Indeed, he tells me business is so good that Ports America is spending more than $100m building a new dock. Berth Four will allow even bigger ships from China to dock when the Panama canal is widened.

Of course the imbalance in trade, the fact that China exports far more than it imports, is one of the sources of friction. The US trade deficit with China was $266bn in 2008 and last September President Obama slapped a tariff on Chinese tyres. China responded in kind with taxes on chickens and car parts.

There is annoyance in the Obama administration at what it sees as an undervalued Chinese currency.

This year other friction has produced sparks: The sale of arms to Taiwan; a cyber attack on Google; repeated American pressure over sanctions against Iran. Within the last few days there has been the dumping more than $34bn worth of bonds.

And of course there is today's visit of the Dalai Lama to the White House (more on that when it happens).

But how serious is this dip in relations between the two most powerful countries in the world? I turned to a former director of Asian affairs in the National Security Council, Professor Victor Cha who is now at the Centre for Strategic and International Studies.

He told me that the Obama administration appeared to be taking the reverse approach to that of the last two US presidents. Bill Clinton and George W Bush started off being tough with China but ended up taking a pragmatic line.

In his own first year, Mr Obama took a much softer line and told China what its leaders wanted to hear: that they were a big global player with a central role. 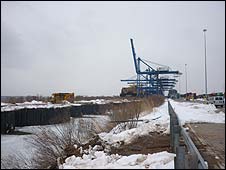 But, said Professor Cha, China did not play ball on the issues that mattered most to Mr Obama, namely climate change and Iran. The professor did not fault the president for trying, but says the White House is now taking a tougher approach in 2010.

He says that in China itself there is a debate between those who want to continue with the policy of a "serene environment" - not rocking the global boat in order to best grow their economy - and those who believe the time has come to take on the mantle of a great power, taking more assertive action in the world.

But, he added, the US and China were "mutual hostages" because of their economic links, and those who talk of the danger of China dumping the US debt forget what harm that would do to the Chinese economy.

The reality of the relationship may lie more in the Baltimore docks than in angry words about a meeting in the White House Map Room.