Was the Senate leader being racist?

The senior senator, the Democratic leader in the Senate from Nevada is in a whole heap of trouble. It was never going to be easy for Harry Reid to hold his seat in November's elections. It just got a whole lot harder. He is the Republicans' number one target and they've scored some hits over the weekend after revelations in a new book about the 2008 campaign.

I have no doubt the row about what he said during the campaign about Obama's chances of becoming president have decreased his chance of staying senator. That's politics. But is it fair? 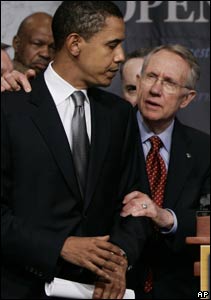 Indeed is what he said racist, or in any other way reprehensible? Liz Cheney thinks it is racist. The Kansas Star calls the remarks "stinking racist comments". A left wing blogger Field Negro says it is "ignorant stereotyping". Mr Reid himself refers to the comments as "improper".

But what has irritated me about the flood of articles is that there has been a lot of nudging and winking but few have come out and said what they find offensive.

So let's have a look at what he actually said. The comments come from a book out this week, Game Changes .The authors say Reid "was wowed by Obama's oratorical gifts and believed that the country was ready to embrace a black presidential candidate, especially one such as Obama - a 'light-skinned' African American 'with no Negro dialect, unless he wanted to have one,' as he later put it privately."

It seems to me the are three parts to this.

First, talking about a "Negro dialect" sounds to my ears just curiously old- fashioned. "Negro" itself is an odd word to use these days - but is it inherently racist ? The part about "dialect" seems simply inaccurate, although those who know more about it suggested it is indeed a term from the past. But it is obvious that there are accents that could identify someone as black, or white, or southern or rural or a host of other identities.

The second, really embarrassing part is that Reid is suggesting that the leader of his party can adopt an accent at will, when it suits. Not good to be snide about the boss. But the point he makes is trivial. The skill is hardly unique. Tony Blair could do public school or London at will. He'd have a go at Scottish or Northern and I even heard a moment in his last election campaign when he put on a French accent after attending a school French lesson. It is something many politicians do, literally without thinking about it.

But the guts of what Reid was saying was that many American voters were still pretty racist but some wouldn't see Obama as "really" black. He thought Obama was acceptable to the electorate because he was light-skinned and didn't have a voice that identified him as black. That seems to be Reid's attempt to describe a state of affairs that may be unpleasant, but may be true. He was explaining the lie of the land as he saw it, not endorsing the views he outlined. If you can't do that you are no good as a strategist.

One of the worrying things about American political discourse is that some (mainly white) people regard any reference to race as "racist" without looking at the content of what is being said. Maybe some are embarrassed that Reid's analysis may be correct.