Could the Democrats lose control of the House later this year, not to the Republicans, but to the Tea Party?

Some of the organisers of the conservative movement that took cable TV by storm last summer are in Washington to discuss where they go from here. Some say it was their below the radar organisation that took Massachusetts for the Republicans last week. They are on a roll.

About 60 of their organisers have been brought together by FreedomWorks in an office block a stone's throw from the White House to work out strategy.

How can a leaderless, grass roots movement hope to curb the man in the White House and the men and women on Capitol Hill? How can a radical movement keep pure when the party machines want to harness its power for their own benefit? These are a couple of the topics up for discussion.

But the key must be whether they can take the House and the Senate in November's mid-term elections. Not for Republicans, but for conservatives.

For once perhaps that cliche "only in America" is true. The fuel protest in Britain some time ago looked like a mass movement. But it fizzled to nothing. Only in America is there the peculiar system of primaries: the ultra-democratic system of internal party elections to decide on candidates, open to anyone who wants to register themselves as a supporter of that party. 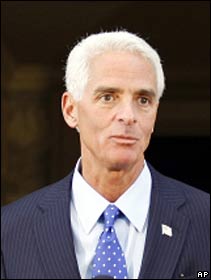 The Tea Party people say they are now a multi-million-dollar organisation that will have an impact on perhaps hundreds of such races all over the US. One of the most important will be in Florida, for senate seat where the Governor Charlie Crist was the front runner in opinion polls, but has been over taken by Marco Rubio (my man to watch in Radio Four's look-ahead to 2010). The Tea Party Patriots' Florida organiser Robin Stublen told me: "We believe Charlie Crist has not shown conservative values as governor. The man has recently said he's cut taxes yet every single fee has doubled or tripled across the state, everything from drivers' licences to voters' registration to property taxes have gone up. We believe we need to vote a person in with conservative values and that's what we base all of our judgements on."

The movement's name celebrates the Boston Tea p
Party. There is a very deliberate constant reference to the values of the war of independence, the founding fathers and the Constitution. While the British Crown isn't now the enemy, taxation and representation do loom large. When I ask what they want freedom from, what they dislike about Big Government, the repeated answers are about taxation. Their conservatism has a capital E. E For Economic. If people want to talk about guns or gays or abortion they tell them there are plenty of other groups out there.

The Tea Party Patriots' national organiser Mark Meckler says it is about reining in all politicians, stopping them spending. He asks me if I have children and when I nod says: "I liken it to teenagers. If you left home to do some reporting and you left your credit card on the table and you left the keys to the liquor cabinet, you would come home and there would have been a party and the house will be trashed and there will be charges on your card. You can get as mad as you want with your children but that's your responsibility. The folk on the Hill there are like those teenagers, and we've left them the keys to the cabinet and the credit card and it is up to us to be responsible parents and hold them accountable."

But representation is as important as taxation. There is a constant refrain that the national politicians are ignoring the will of the people. It is clear their constant stress on the importance of Twitter and Facebook is not an attempt to be trendy, but that social networking has made them feel part of a huge movement.

Bill, an organiser from Maryland, told me: "For most of our lifetime we all feel like the child who always has his hand up in class. He has the answer and never gets called on. And eventually he just clams up and doesn't get involved anymore... But finally we've now found a way to keep in touch on the phone or via Facebook or e-mail and now can be heard. And now we have microphones and we can be heard 1,000 miles away."

There is no display of the visceral hatred that dripped from the cable networks last summer, and little of the sense that Obama's government is some how illegitimate, rather than just plain wrong. There is a feeling that the president promised to govern from the centre and he hasn't. But I have to ask, is this movement really of the people, or of largely white, largely well-off people?

Mark Mekler says: "Go to our protest and you can see people of all colours, all social strata, of all parties. This is a broadly-based people's movement representing what I call the great middle of America. The left will say those things to denigrate us and we've heard it for years. The bigger we get, the more powerful we get, the more you will hear those cries. They are cries of desperation by people who have pushed a political agenda on us for years and now find themselves falling from favour."

The Tea Party Patriots' main enemies may be the Democratic Party and the president, but Republicans will be pondering what the movement means for them in the mid-terms. It is a powerful machine for getting people to vote. But the people I spoke to had no intention of being a tool of the party hierarchy. Like many revolutionaries they prize purity over victory. But they think they can have both.