Kansas is notoriously flat, the monotony of its endless fields broken only by buildings, cows and dark, nodding machines, almost like a scale model of some child's toy. 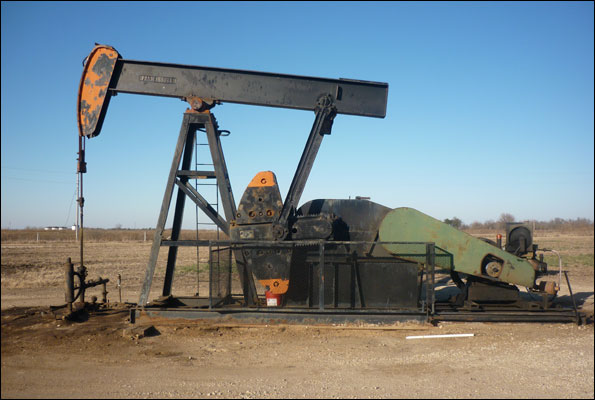 Under the flat Kansas soil still lies a crushed forest, and these machines are dipping into a sea of oil and sucking it to the surface.

Dick Shremmer, the president of Bear Petroleum, has two working machines in the fields behind his office, a total of around 400 scattered around the state.

He shows me how to put my fingers, lightly, on top of the rod driving into the ground, and to feel for the vibrations that show it is pulling up the oil.

With their car wheel-sized cogs, solid steel heads and gleaming pistons there is something rather loveable about these machines, like an old car or a printing press.

They seem from another time, of rag and spanner, far from the microchip and semiconductor.

Some would like to make sure that the carbon fuel they exist to draw above ground soon becomes a relic from another age.

Dick, who's recently become president of the Kansas Independent Oil and Gas Producers Association, hopes and believes they will fail. 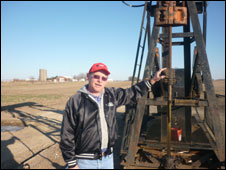 He has worked in the industry since he was 15, he loves oil and profoundly disagrees with those in Copenhagen who cast it as a villainous pollutant, a threat to mankind.

He says it is all the biggest hoax since the millennium bug. He doesn't doubt that the climate is changing, but doesn't accept carbon is the villain, or that there is a villain in the piece.

"I wouldn't say the climate isn't changing. But, you know, it is always changing. We once had an ice age thousands of years ago, and during that ice age where we are standing used to be covered with an ocean. So I think it is just a normal climate change, I don't believe in this global warming thing.

"I think it is something that is going to drive up the price of energy, people's electrical bills, people's fuel bills and I don't see any reason for it.

"I don't think we should do anything to burden our economics right now. We are trying to come back from a big recession. I think we ought to leave things alone until the economy picks up and we can afford to make some changes."

There is lots of oil in Kansas but it isn't big business anymore. Dick describes it as "a mom and pop" affair.

But throughout the US, coal, oil and gas are very big business with very big budgets.

Oil and oilmen have played a huge part in American politics and they are not about to roll over now.

Given that many powerful senators come from states where one of the carbon fuels is a major industry, the political terrain President Obama faces is more mountainous Alaska than pancake flat Kansas.

Powerful interests are at stake, but so are powerful convictions.

Senator James Inhofe from Oklahoma has long believed man-made climate change is what he calls "a Hollywood hoax" perpetuated by a liberal elite. 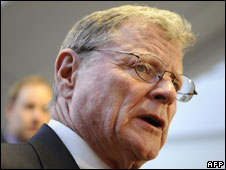 He's going to Copenhagen to tell them the president can't deliver on his promise to cut greenhouse gases by 17% by 2020. He told me of the plan:

"It's dead. In the Senate it's dead. Let me restate that so that nobody has any misunderstanding, there are two pieces of legislation, one is the Waxman-Markey bill from the House, the other is the Kerry-Boxer bill. Both are dead. They will not pass the United States Senate. The closer you get to the (Midterm) election, the further away from this thing they'll want to get because the American people understand this issue now."

It has been widely argued that the president has a big stick in his back pocket: the Environmental Protection Agency recently confirmed that greenhouse gases were a pollutant.

So they could simply issue an edict to make the cuts.

The senator says the recent kerfuffle over e-mails between climate change scientists has cut off that route.

"The Obama administration-appointed Director of EPA Lisa Jackson has emphasised and stated that the science on which the endangerment finding is based is the International Panel on Climate Change science which has been debunked. So the courts would look at that, and I would think, throw it out. If they don't, it would be tied up in the courts for years anyway."

That's why he's going to be in Copenhagen to tell the world the president won't deliver:

"I think it's unfair for the 100 countries to leave Copenhagen when the big party is over believing that we are going to do something we aren't going to do, so I think it's a mission of honesty."

For Dick, tending the machines in his fields with as much care as a farmer gives to his cattle, the price of oil means it's scarcely liquid gold.

But it is a cash crop of sorts and there is lots of it under the United States. He says WWI was won on the Kansas fields, WWII on those in neighbouring Oklahoma.

It's certainly true America's might in the world has partly been built on its rich resources of fossil fuels.

It is still a power source that is relatively plentiful and cheap, when money is tight and jobs hard to come by.

For the president to live up to his promise, he will have to shift the argument, and convince people that green power is the power of the future and means, not threatens, American security and wealth.

The machinery of the senate will have to be greased with lots of money. But it will be a while before the nodding donkeys of Kansas are put inside a museum's glass case.