"America won't let you down"

"America will not let you down, we will take care of our own." President Obama's words are perhaps exactly what you would expect any commander in chief to say.

But he not only makes these remarks ahead of a vital meeting about sending troops to an unpopular war, but against the background of two unpopular wars. 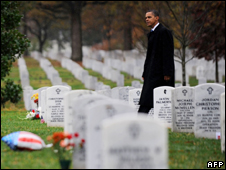 He did not refer to Iraq directly, but to the war that scarred America's soul and divided its people like no other.

He said that in honouring the obligations to those who have fought "we are keeping faith with the ideals of service and sacrifice upon which this republic was founded".

"And if we're honest with ourselves, we will admit there have been times where we, as a nation, have betrayed that sacred trust. Our Vietnam veterans served with great honour, and they often came home greeted not with gratitude or support but with condemnation and neglect. That's something that will never happen again."

The comparison is interesting not just because you can hardly move in this town for articles comparing Afghanistan to Vietnam.

It is interesting because of Iraq. Such is the reverence for the military in America that even at the height of opposition, there was no suggestion that those who fought there should be regarded as anything less than heroes.

President Obama did not support the Iraq war and campaigned on a promise to bring troops home. But his language could be taken as reassurance to veterans of that war, that they will be honoured whatever the verdict on the politicians who sent them to fight.