When Congressman Joe Wilson outraged some members of his own party, and delighted others, by shouting out "you lie!" during the president's speech, American commentators talked sniffily of the sort of behaviour you would expect in the British House of Commons, not Congress. 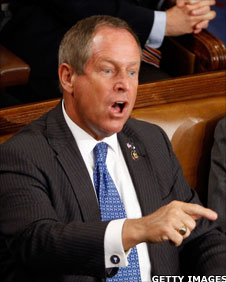 It is true that to American eyes and ears, our democratically-elected representatives are a rowdy lot. But "you lie" is clearly unparliamentary language and, if shouted from a sedentary position, the Speaker would probably stop proceedings to issue a warning and perhaps ask for an apology. If one was refused, the member could be expelled from the session.

If an MP wants to accuse someone of lying, she or he has to say something like "The right honourable member has involuntarily misled the house as to the facts of the case." Stuffy, but that's the point. The rules are intended to defuse potentially violent debate. After all, the distance between the government and opposition benches is said to be the length of two drawn swords.

In the United States, it has got physical. In 1856 Senator Charles Sumner made an anti-slavery speech, singling out two fellow members of the senate for vitriolic abuse. He said of one that he was like Don Quixote, who imagined himself a chivalrous knight but was devoted to his "harlot, slavery, who, though ugly to others, is always lovely to him."

One fellow politician called it "Un-American and unpatriotic."

The abused senator's cousin, congressman Preston Brooks, went further. He went into the senate chamber and beat Sumner around the head with a heavy gold-topped walking stick until the cane broke in two and the unfortunate senator, blinded by so much blood, managed to get up, ripping his bolted desk from the floor and staggered off to collapse unconscious. The resulting brain damage was so severe that he did not return to the Senate for three years. Some were exultant: the governor of South Carolina rewarded Brooks with a silver goblet and new walking stick, and one southern paper declared his only mistake was not to use a horse whip. (For most of these details I returned to Doris Kearns Goodwin's superb Team of Rivals.)

Of course, within five years, Americans were at each other with more than heavy canes. The assault obviously graphically demonstrates how tempers were rising, but it also further inflamed the mood on both sides.

More recently, in 1964, Senator Strom Thurmond wrestled another senator to the floor in an attempt to stop a detail of civil rights legislation. As the Washington Post gleefully points out Wilson, Brook and Thurmond all hail from South Carolina.

This geographical oddity interested me less than the description of Sumner's speech against slavery as "un-American and unpatriotic". It is an oft-repeated charge in American politics. It happens elsewhere of course, but Americans seem particularly prone to suggesting their opponents are not only wrong, foolish or misguided, but treasonous to the ideals of their country.

It seems to me, in the current debate, it is partly the president's status, both leader of a political party and embodiment of the nation, that explains such vitriolic anger. Many, including the Republican hierarchy, seemed outraged by the disrespect inherent in Wilson's outburst. 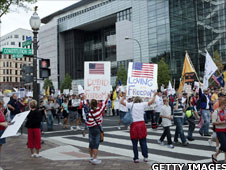 But it works both ways. Those who dislike Obama aren't just against his policies, they feel that because the president stands for their country, his espousal of views alien to their vision of America amounts to an unpatriotic betrayal. Listening to the "tax-payers' tea party" in Washington on the radio over the weekend, it struck me that if I were reading a transcript blind of context, I would assume I was listening to a demonstration of a growing resistance to a brutal and undemocratic regime.

Indeed, in the four or five speeches I heard on the radio, details of tax rises and healthcare were hardly mentioned: the theme was "recapturing America" from "tyranny" and regaining "freedom". It sounded as though they were protesting against a coup, probably a violent one, rather than the natural consequence of losing an election less than a year ago.

But I am too new to this place to know if the debate is getting harsher, more strident, even uglier, or whether this is just the vigorous terms of debate that are normal. I'd like to know what you think. But it is why many see Congress as the last refuge of grown-up debate, and want to keep it that way.