In the bag for Barroso?

The socialists have given notice that Jose Manuel Barroso, the current Commission president, will not hold onto Brussels' top job without something of a struggle. 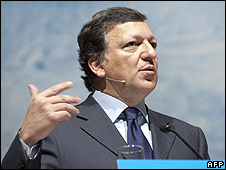 The socialists' president in the European Parliament, Poul Nyrup Rasmussen - himself a likely contender for the job if it was in the gift of the Left - has signalled in a blog that Mr Barroso shouldn't consider it in the bag.

During this election period I find myself repeatedly trying to explain how and if these elections matter. This is but one illustration of how they do have a real impact. Just not a straightforward, simple-to-understand one.

In essence Mr Rasmussen admits that the Christian Democrats, the EPP, may well remain the biggest party grouping when the elections are over. But he's pointing out that these supporters of Mr Barroso won't have an absolute majority, and a combination of greens, liberals, the new British conservative group and his socialists could push an alternative candidate. Rather generously he offers not himself but the former Prime Minister of Belgium, Guy Verhofstadt, who is a liberal - and confusingly a candidate in the elections to the European Parliament.

Of course, the decision is not up to the parliament, but the 27 presidents and prime ministers of the EU: although I suspect it boils down to five or six of them and the rest will go along.

Opinions are sharply divided about Mr Barroso, although I am unsure how his critics expect him to be bolder and braver without the support of major governments. Brussels is not the place for dead heroes but achievable compromise.

Gordon Brown supports Mr Barroso, rather to the annoyance of other socialists. But Nicolas Sarkozy has fired a warning shot across the current Commissions president's bows, suggesting that a deal cannot be done at the planned summit in June. What would you like a new Commission president to do?