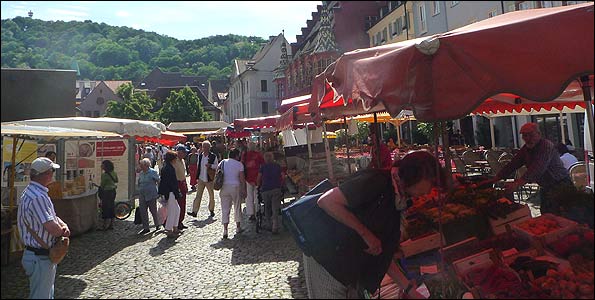 It's possibly my imagination, but the air here seems to taste cleaner. This pretty city nestling between the green hills of the Black Forest definitely does sound different. You can hear birdsong and the skittery clatter of bikes on cobblestones. The noise of a delivery lorry pulling up outside the rather magnificent town hall is a startling intrusion.

What is missing is the constant low thrum of traffic in the background. It's not that cars are completely banned from the city, but most of the centre, rather than the odd street, is a pedestrian zone. You pedal or walk to trams or trains. Freiburg can lay claim to being the greenest city in the world, and it's all rather pleasant.

But it is a political act. The city is the largest in Germany where the Green Party are in power. The Greens currently have 43 members of the European Parliament, two of them from Britain, and feel somewhat under pressure with so many other politicians putting the environment near the top of their priorities. 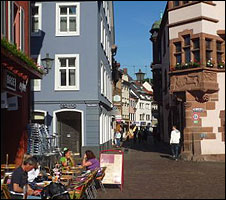 If Greens ruled what would the Green World look like: Freiburg or the more radical vision of the English and Welsh Green party?

Freiburg is not just about cutting the use of cars. It likes to be known as "Solar City". The town hall and the football stadium, swimming pools and the station boast mirrors to create solar power. New houses have to consume a third less energy than German law requires.

Green politicians are in charge and the deputy mayor, Gerda Stuchlick, says: " There are clear consequences. We've reduced CO2 by 40% and we have 10% renewable energy. What's unique is we have institutions, policy and the will of the people coming together."

And she's not worried that other parties have been going green.

In one suburb that's home to 5,000 people, Vauban, they take things further. The flats are overflowing with quite literal greenness, vegetation tumbling down their outside, and they are green inside as well - low-energy housing. 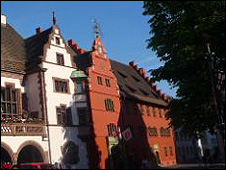 Cars aren't banned even here, but there is little space for them. The wide roads are clearly made for trams and bikes and people.

Martin Kummrow moved here from Berlin so he could live the green life. If he wants to drive somewhere he just has to register that he wants to use a pool car and an electronic swipe car lets him in.

He says this is politics working. "It's been a full, complete success. Most people are happy with the things realised here. It's a paradise for the children."

But it's also very pragmatic, almost unpolitical, in that it doesn't seem that contentious. In Britain there are no Green MPs, or Greens in charge of big cities. But the English and Welsh Green Party does have a very radical manifesto.

Whereas most economists and politicians fret about the drop of economic growth in the recession they question traditional targets like GDP, and would like growth reduced to zero. They would encourage part-time, rather than full-time work, preferably done at a household level.

They would rein in lending by banks, which would be placed under local democratic control, and the pound could be replaced in part by local currencies.

Green MEP Jean Lambert says: "The Green Party has always felt we are very limited in the way we look at our economy and that we always look at economic growth as the only measure you can have. It says nothing about the quality of what's going on in your economy; it simply says how much.

"The Greens have always argued you need a range of indicators so you can measure things like jobs and resource efficiency. Then you get a much clearer picture of your economy, rather than this growth obsession, which at the end of the day means you are using up the planet's resources very quickly, with no real thought for tomorrow."

In Freiburg much more modest changes than called for in this manifesto have taken time. I don't think it's too fanciful to feel it is an example of a very deep political culture. "In Freiburg city, it's clean and pretty," a poet wrote more than 200 years ago.

One charming feature of the city is the channels of fresh clean water running beside the pavements. They are meant to cool the air and their pleasant gurgle echoes a forest stream. They are most definitely not gutters: they've existed since the Middle Ages, and even then you could be fined for polluting them with waste.

When I asked the deputy mayor about the zero growth policy she looked shocked and didn't know what I was talking about. Martin does. He says out of power people tend to scream about what they want.

"What should we demand and what should we say to the people when there are elections, what should be promised? This fighting takes place in the Green Party too. Greens are more practical in power, but others are still idealistic and say what they want to happen."