Gordon has learned to talk European. His past disdain for EU meetings is well known, but talking to the European Parliament in Strasbourg he hit a note that he knew would go down well - although applause was rather more sparse than I might have expected. 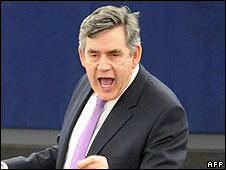 It wasn't just that he talked about being proud to be European and proud to be British, not an island adrift, "not in Europe's slipstream but firmly in its mainstream".

It was not just that he talked of the European Union as a model for peace and prosperity for the rest of the world.

But it was important that he emphasised the agenda that is being pushed for the G20 by the Germans and the French. A couple of mentions of "fiscal stimulus" yes, but much more about tough new regulations. "The problem of unbridled free markets in an unsupervised market place is that they reduce all relationships to transactions, all intentions to self-interest, all sense of value to consumer choices, all sense of worth to a price tag."

Most here see Brown as an Anglo-Saxon free market liberal, so it was at least interesting the leader of the Socialists called the speech "brilliant" and "courageous".