Could Greece laser the euro?

Greece has been told to pull its socks up and sort out its problems by one of the EU's longest-serving politicians, Luxembourg's Prime Minister and chairman of the eurozone's finance ministers, Jean-Claude Juncker. 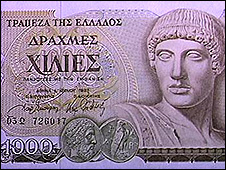 There's been lots of speculation about the eurozone flying apart, or at least the weaker members being forced out. I am pretty certain the eurozone countries would move heaven and earth to prevent what they would regard as a political disaster.

But the CER think-tank has come up with a fascinating report on how to create a new currency overnight, which apparently could include burning holes in euro banknotes with lasers, or stamping them to turn them into punts, drachmas, or whatever.