But is it art?

It probably says more about our perception of artists than the Czech government that no one spotted that the art installation "Entropa" was an elaborate hoax merely by reading the pretentious text attached to each art work.

Now we know it was not as promoted, a piece from artists in each of the 27 EU countries. It was in fact all the work of one Czech artist.

The Czech presidency boasted that the artwork, based on an outline of each country, would speak where words fail. Try this failure for size. Alongside the supposed Italian entry, the map of Italy with the figures of nine footballers is the legend "it appears to be an autoerotic system of sensational spectacle with no climax in sight". Or next to the alleged British entry, an Airfix kit of Europe with the UK removed: "this improvement of exactness means that its individual selective sieve can cover the so-called objective sieve".

But the fact that it is a hoax does not mean that the art itself is bad. It's clear the artist David Cerny has a keen intelligence and wry sense of humour. There is the map of France with the declaration "On strike!" - alongside a decaration by the imagined collective "Group de recherche d'art audiovisual" that they have gone on indefinite strike as a protest against globalisation. 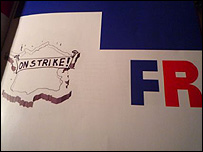 There is the rather sweet image of Malta with a dwarf elephant atop, the thought-provoking hammer and sickle power tools for Estonia.

But some are darker: the map of Bulgaria with a sketch of a squat-down loo and the words "Turkish toilet", and Holland drowns beneath the waves with only the towers of minarets showing.

It was the Telegraph's man Bruno Waterfield who first sniffed something amiss on his blog. The Czech responded at first churlishly with an insistence that all 27 artists would be at Thursday's grand opening. A few hours later they admitted it was all a hoax and that they were "unpleasantly surprised". 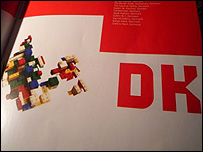 The text alongside a model of Denmark made out of Lego should have given the greatest warning. It says: "We too should grasp the whole picture of the world, let's not get caught up in individual pixels, but see what they form". I haven't seen the exhibition itself and there is no clue in the angled picture in the brochure, but TV and still pictures of the design do look at a distance rather like one of the infamous Danish cartoons of Mohammed.

The Czech Deputy Prime Minister Alexandr Vondra's introduction to the installation, stating that "in today's Europe there is no place for censorship.. I am confident in Europe's open mind and capacity to appreciate such a project" may soon be tested.