This time next year surely the Lisbon Treaty must either be dead and buried or alive and kicking. 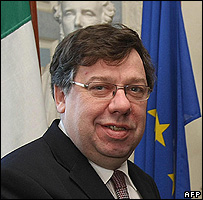 My prediction is that next week the Irish government will announce that it will ask the Irish people to vote again on the Lisbon Treaty in a new referendum next autumn.

The Irish prime minister is on a whistle-stop tour of Europe - first Luxembourg, then Germany, London on Thursday then a quick trip to Paris on Friday. While he does the major players, his Europe minister is visiting the capitals of the smaller countries. (Luxembourg may be a tiny country but Jean-Claude Juncker is a big player, on account of his political longevity and his role leading the eurozone countries.)

What they are hammering out is the outline of a deal to put to next week's European Council. They are looking for something that would allow them to say this is not holding the same vote all over again.

Whether the piece of paper ends up being called a protocol or an opt-out or whatever, it would amount to a series of disclaimers. Anyone who's been following the story would know what sort of things it would promise. It would say that Ireland's position on neutrality/abortion/tax will not be affected by the treaty. It's likely the other countries would readily agree that, if the Lisbon Treaty is voted through, the commission can stay at its current size. One of the worries was that Ireland would lose influence by losing a commissioner every so often.

Will this be enough for the No campaigners? Definitely not, they will regard this as undemocratic and insulting.

Will it be enough for the voters? It's a very high-risk gamble. On the one hand, in a deep financial crisis, the Irish government will argue now is not the time to cut ties and float away from the safe haven of the European Union - and there will be attempts to suggest that is what another No vote would mean.

But just look at Prime Minister Brian Cowan's poll ratings, which have been plunging since the early summer, and you know that he is gambling his job when the odds are against him.

And an even more intriguing question: what would a second No vote mean for the treaty? A famous Lady Bracknell quote - that losing one parent looks like a misfortune, but losing two looks like carelessness - might spring to the minds of other European leaders. But more to the point, it would either kill the treaty stone dead or force the EU to go ahead without Ireland.

Freeborn John: I will carry on writing about this and any other EU subject when I feel like it and when it is appropriate. Lisbon is important but so is the effect of such treaties in people's ordinary life: so what sort of cars we drive, and what fish people are allowed to catch are at least as interesting to me as grand institutional arrangements.