The revolving doors of the European Parliament in Brussels are spinning as people with suitcases bustle in and out, the coffee shops are full of men and women huddled over pieces of paper, heavily underlining important paragraphs, and the corridors are full of people hurrying along to meetings.

All of this is very unusual. For this is the time of the month when they should all be gathering in Strasbourg, as they are meant to do for every full session. 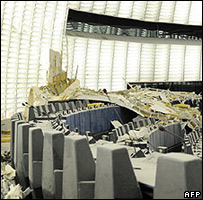 But over the summer ten tons of rubble descended from the beehive-shaped roof there, onto the desks and chairs below, and work is still going on to repair it. Had they been meeting, people would have been killed. But it's given a new impetus to the "single seat" campaign, run by those who want one parliament, based in Brussels.

The leaders of all the British parties in the parliament support it.
Labour's Gary Titley says: "It's just bad for the image for the European Parliament, which is now increasingly being associated with waste and extravagance".

The Conservatives' Philip Bushill-Matthews agrees. "Some of the few MEPs who did like going to Strasbourg are now joining our campaign and saying 'What's the point? Let's stay in Brussels'." So does the Liberal Democrats' Andrew Duff. "For us to travel to Strasbourg is expensive, tiring and takes us away from the centre of power. The centre of political power in the EU is in Brussels." He also says that if the Lisbon Treaty was passed MEPs themselves would have the power to change where they meet, although others dispute this.

The restaurants and hotels in Strasbourg are half-empty and the city is beginning to feel the pinch. The mayor, Roland Ries, says "this has revived the ardour of those who campaign against Strasbourg.

"But it has made us realise what the economic impact would be: hotels, shops, restaurants: we're losing four million euros each cancelled session."

So one French MEP has launched a counter-campaign. True, Brigitte Foure only has just over 1,000 signatures, compared to over a million for the one seat campaign. But she tells me that, although she is not from the area but from Picardy in northern France, it matters to her. And it is the symbolic, not economic, argument that counts.

"I come from a land of wars and it is really important to hold this meeting in the city. European delegates are elected at the same time in the same week. It's something amazing and a symbol to the world that we can live in peace and build a better future. I am attached to the European flag and anthem and these symbols support what we believe in. In Strasbourg the parliament is built expressly for this purpose and I want it to continue." 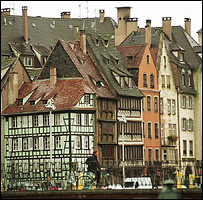 To my knowledge the only British MEP to support Strasbourg is Lib Dem Emma Nicholson who, like Madame Foure, thinks it should be the only seat. She says that it's not just about the past but the current, underlying political reality.

"Beneath the surface of this very civilised European Union we have the ongoing permanent tensions between France and Germany. In Strasbourg we have the Council of Europe, so we can pop next door over the bridge and talk to the Russians, the Eastern European people, the whole of the real Europe. We're very isolated here in Brussels, an ivory tower becoming more and more like the UN every day, further away from a parliamentary democracy. Very comfortable and happy here, but the reality is France, Germany, the rest of the world and the Strasbourg Court of Human Rights as well."

A German MEP who is spearheading the opposing campaign disagrees. Alexander Alvaro tells me "it certainly is a powerful symbol, but right now it's backward-looking, at what has been done in history. It's a symbol of the ancient European Union, rather than looking forward."

It may matter what they all think. But it's not in their gift. Where they meet is set down in a treaty that has to be agreed by all the presidents and prime ministers of the EU nations. If my memory serves me correctly, it was in Edinburgh that John Major backed the current arrangement. It would mean Chancellor Angela Merkel and Gordon Brown (and the rest) taking on France's Nicolas Sarkozy. And the senior politicians I talk to feel they have better things to do, and indeed better horses to trade, than taking on a symbol that means much to the French.

To those who didn't like yesterday's post: I do like stimulating furious debate, but that is not the only purpose of a blog: it is there to read. And yes, on the whole it should be about Europe, but I don't see why I shouldn't talk about other aspects of the job. Maddy cute? I thought I was being more paternally talent scout-ish. But I will leave it up to you if you want to start a cuteometre for everyone I ever mention.