It must be serious. There will be no dinner, no welcoming handshake, no family photo. This no-frills emergency summit of the leaders of the European union is the first of its kind since the eve of the Iraq war in 2003. The 27 countries are just as split as then, and along roughly the same lines.

But this time it is about a crisis, not only on Europe's doorstep, but about Europe's ambitions and borders. Should political Europe, in the shape of Nato and the European Union go on expanding into what Prime Minister Putin regards as a "post-Soviet space". 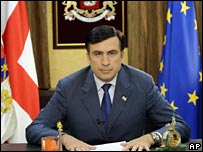 When Georgia's leader gives a new conference, he does so sitting in front of the blue field and gold stars of an EU flag. Should Georgia and Ukraine be encouraged in their ambitions to join the European Union and Nato? And should Russia be forcefully warned off such intervention in the future? Or indeed should the first European war of the 21st century be treated as a one off, a result of Georgia's cack-handed handling of a delicate situation?

Many of those who see this as not only a big test but a big opportunity for the development of European Union foreign policy will stress the need for unity above all else: certainly above punishing Russia. It will be easy for the gathered leaders to promise more money and more help for Georgia. Those overawed by the bigger implications of the invasion will feel that averting their eyes to focus on the humanitarian worries, the state of roads and the ease of access to hospitals is at least worthy and practical.

It seems all but decided that there will no sanctions against Russia. No punishment for the initial invasion, nor for failing to implement President Sarkozy's ceasefire, nor for recognising the breakaway republics. The likely form of words will be that the EU should "keep under surveillance its relations with Russia".

Some will just see this as moral cowardice on the part of countries which are heavily reliant on Russian gas and oil. Gazprom, which strongly denies it would use its muscle for political purposes, issued a statement a few days ago making it clear that "Gazprom depends on Europe as Europe depends on Gazprom. Europe is Gazprom's most important market. Gazprom has been, and will be, a reliable supplier of energy. Gazprom has reliably delivered gas to Europe for more than 35 years. There were not even supply disruptions during the most difficult times such as the Cold War and the break-up of the Soviet Union. The accusation that Gazprom has "turned off the tap" in the past for political reasons is simply not true. "

But the trade opportunities with Russia are huge, and many European politicans and business people salivate at the thought of this expanding, rich market place. 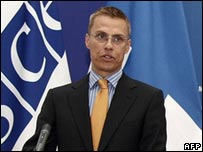 Finland is one country that does an increasing amount of trade with Russia, and its foreign minister Alexander Stubb was deeply involved in the ceasefire negotiations as current chairman of the Organization for Security and Co-operation in Europe. What, I asked him, did he want from the meeting?

"First of all, that we get a united position and that means tough language politically. The second thing I am hoping for is to go a little bit easy on the economic sanctions. These two things: tough talk and easy on the economics. Because I think that we are mutually interdependent with the Russians. We need Russian energy and Russian markets, and the Russians need our energy markets. So if you end up fighting against economic liberalism no-one is going to benefit."

I put it to him some would see that as pure cowardice. "No I think it's mathematics. It's not about cowardice but about facts of life. If we want our economies to go down, if we want the Russian economy to go down, yeah lets go for the economic sanctions. Paradoxically, what this crisis will do is get a more united position from the European Union. There's a lot of tough talk from some countries, others are way too soft, some are in-between but this will make us all realise Russia is back and Russia is back with a vengeance. It means we have to sit around the table and have mutual respect. "

As I've tried to highlight on my last post on the subject many see the most obvious punishments, blocking or expelling Russian from international bodies, as counter-productive. If the aim is to get Russia to abide by international rules, they ask, what's the point of throwing them out of clubs that exist to enforce such rules? There is a small chance that the next meeting to discuss trade talks with Russia, planned for the 15th of this month could be called off.

But these are not the only sanctions. One diplomat has suggested to me something like a travel ban on the generals commanding the tanks that rolled into Georgia.

In a masterful and thought-provoking pamphlet for the Centre for European Policy studies, a former EU ambassador to Russia, Michael Emerson, argues there are other sanctions: "If, for example, Russia's actions towards Ukraine became analogous to what has just been seen in Georgia" he writes "economic sanctions by the EU and the US together could include banning Russian direct and real estate investment in the EU, freezing financial assets of Russian companies and individuals, stopping new operations in Russia by the EBRD and the raising of capital by IPOs on Western stock exchanges, etc. Boycott of the Sochi winter Olympics scheduled for 2014 would naturally follow in due course" .

It is worth remembering that for all the hot words, the United States isn't promising any firm action either. If I am right, and the EU backs away from sanctions is this common sense, or craven?