Many of the 44 leaders who came to Paris for the Mediterranean Union summit will make their excuses and leave before the 14 July spectacle. Those who stay may enjoy a little booklet to help them spot the uniforms of the various French troops who will be marching down the Champs Elysees. I know it is the sort of thing I would have not only pored over, but memorised as a ten-year-old. The cloaked and heavily armed amphibious troops of the First Regiment of Spahis, and the bearded Sappers of the Foreign Legion would have been my favourites. 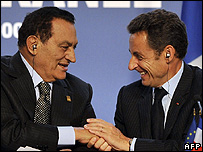 This sort of march-past is extremely rare in Europe, and the only countries in this neck of the woods who mount such displays would be the Turks and the Russians. But of course the French are particularly concerned with demonstrating that they are still a major power in their own right.

President Sarkozy was cock-a-hoop at the end of the meeting. He said his idea and initiative was "an extraordinary concept, and extraordinary gamble". He had asked the leaders of the Arab world to sit in the same room as the Israeli prime minister and the "wager paid off". He said that the real problem of the Middle East was a lack of trust, and he hoped to take a risk and establish that trust.

While it is still not clear why President Sarkozy thought up the idea of the Mediterranean Union in the first place, it's true the first ever summit in Paris this weekend made a real impact, at least in media terms. The Syrian president suggested that diplomatic relations with Lebanon might be established for the first time, and the Israeli prime minister said a deal with the Palestinians had never been closer. The churlish might suggest there was nothing new here. But as one diplomat put it, "freshness is not the point, it's the continuing thaw and it doesn't matter if the mood music is played twice". Statements were made in public and relayed to people round the region that wouldn't have been made without the Paris meeting. 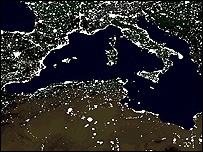 It is certainly higher profile than the already existing "Barcelona process", which set up similar links 13 years ago. But the Med Union will get its own bureaucracy in the form of a yet-to-be-established secretariat, at a yet-to-be-identified location and a joint permanent committee based in Brussels. There are also six concrete projects, with enough detail to keep policy wonks happy for decades to come.

A document that's been given out says that the North and South of the Med share not only interests but also a common destiny, although it is not spelt out what this destiny might be. It points out that the wealth divide between the North and South of the Med is at least 10 to one and that 40 million new jobs will have to be created in the next 15 years just to maintain unemployment at its present level.

Combating pollution: The aim is to clean up the Med by 2020 and make it the cleanest sea in the world. There's a suggestion the whole of the seabed could be declared a protected area, there will be a new body to coordinate coastal protection and a more coherent development of projects like whale sanctuaries.

Transport: One potential aim is developing a modern railway network running from Casablanca to Istanbul, and a high-speed rail network linking Libya, Algeria, Tunisia and Morocco. They also want to promote "motorways of the sea", which basically means modernising ports and integrating sea traffic with road links.

Civil Protection: The development of more coordination and eventually a common emergency response force to cope with earthquakes and fires, floods and drought.

Higher education: Greater contact between universities of North and South and common standards for approved courses.

Business: Spreading the Italian/Spanish Med Agency, which helps small businesses with financing to Algeria, Egypt, Morocco and Tunisia and eventually to the whole region.

Doubtless some of these projects will move along quicker than others, some will work and others will fail. But can the Med Union permanently push the pace on the peace process, or is this first high-profile event a one-off?