In defence of Europe

German, French, Belgian and Spanish flags fly next to the European Union stars above the small compound, which is ringed with sandbags and razor wire. It is patrolled by soldiers with black rifles slung at their hips.

Military vehicles are packed tight by the large air-conditioned tents. Inside, men and women in a variety of camouflage stare at their computer screens and occasionally glance up at the large maps of an unfamiliar country. 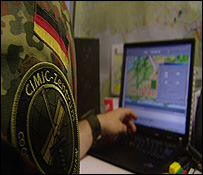 The EU has deployed the 1,500-strong battlegroup to Vontinalys where, as you will know, the first ever free elections are threatened by the powerful local mafia and the pirates offshore, who grow bolder and more dangerous by the day.

Only this morning fighters were scrambled when a light aircraft intruded into EU military airspace. The plane was forced to the ground and two people have been arrested, but we don't yet know the nature of the threat.

What, you've never heard of Vontinalys? Don't bother Googling it. It's a country elaborately, even lovingly, imagined for the purpose of an EU war game. 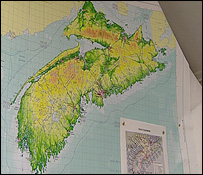 But the EU battlegroup is no work of fiction. At any one time there are two such rapid response groups on stand-by to go anywhere in the world for short missions, the military arm of the EU's foreign policy. Some see them as just the germ, just the beginning, of a European Army.

In July two new battlegroups will be on stand-by. This one is made up of Germans, French, Belgians, Spanish and medics from Luxembourg . The other is a solely British concern, with the Royal Regiment of Fusiliers at its heart. One of my colleagues jokes it is, nevertheless, multi-national, made up of Scots, English and Welsh. Anglos, I supply, as well as Saxons.

The ministry of defence, rather more po-faced, says: "The EU Battlegroup initiative was driven by the UK, and we recognise that one of the positive aspects of the initiative is the chance to work with other countries on providing a rapid-response capability to the EU. 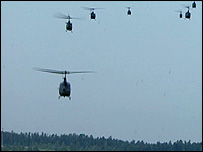 Sadly for those of us with TV cameras, there is no jumping out of helicopters, no tanks rolling across the plains, no rapid firing. The men and women inside the tents are staring at made-up maps on computer screens and ordering non-existent planes to take to the air. It is a test of their command operation, not the skills of troops.

We are actually on exercise in southern Germany, and by far the most exciting action was a helicopter ride, swooping low over farms and forests. Operation "European Endeavour" is designed to test out command abilities. Much of the language used in briefings wouldn't be out of place in the boardroom of a soft drinks manufacturer, or indeed the BBC. The Normandy landing is described as "an immense battle space management problem".

The battlegroups, never yet deployed in anger, have been going for four years now. But expect another big push by those who want something more. 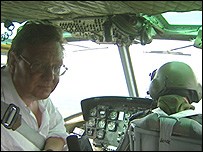 Some of the impetus will come from the Lisbon Treaty, if it comes into force, and part from the French when they take over the EU presidency in July. The French White Book on defence is being kept under wraps, partly because President Sarkozy wants to announce it in a big speech on 17 June and partly so as not to frighten voters in Ireland, where neutrality is a touchy subject, ahead of the referendum..

But I'm told its heart will be:

A call for EU countries to spend more on defence, perhaps a specific proportion of GDP;

A proposal to beef up the rapid reaction forces, so they could operate in two or three areas of the world at the same time;

A call on countries to make available more aircraft for such operations;

A new headquarters, probably in Brussels, to control such operations.

Broadly the UK government will welcome measures that they see as practical and oppose those that are seen to duplicate Nato. But officially they won't comment until the proposals are made.

Sitting alongside his fellow senior officers from France, Spain and Belgium the German chief of staff, a small, tough and rather rumpled-looking man makes it clear such proposals must succeed. 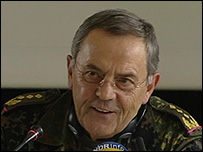 "I am utterly convinced that the European Union has to develop its ability to react to military and civil crises. Working together with Nato we can improve the ability of both organisations to tackle the threats that face our world," says General Wolfgang Schneiderhan.

The big problem is finding countries that want to contribute - not ideas to a philosophical construct, but troops and helicopters to real missions where people could get killed. The Irish have a tradition of neutrality, as do the Scandinavian countries. The German parliament is very wary of operations that look more like war fighting than peacekeeping and the German public flinch if a single solider is killed. Poland is likely to help out, with its large and powerful military.

Jacek Saryusz-Wolski, the Polish MEP charged with producing a report on the future of EU foreign policy, wants the European Parliament to vote before soldiers go to war. He wants the EU to wave a bigger stick than it's got at the moment.

"I think we should continue to be a soft power, stabilising, peace-making, helping to construct," he says. "But we should start being a hard power as well, which means a common foreign and security policy including a European army. We are heading towards this goal by creating EU battlegroups and Eurocorps. But it should be further strengthened and increased and better financed."

Back at the operation among all the camouflage a silver-haired gentleman in a suit is talking in a rather upper-class British accent. I ask him what his job is. He's the political officer and his job is to give advice about how the operation is going down among the local population. But does he think the EU needs to develop this role?

"I would say that if the EU feels comfortable doing this it is another club in their golf bag. So if the countries of the EU are willing to do it in this setting and they are a bit more reluctant to do it under the Nato setting it's probably better that we do it, than worry about the packaging."

But doesn't it undermine Nato?

On my helicopter ride back to Stuttgart I reflect that the military, the US, even the British Conservatives seem happy with not only EU battlegroups but movements towards something like a European Army, even though it seems a term out of the nightmares of those who fear a greater role for the EU. Does it make you shiver, or feel safer in your bed?