Don't ever work with children and animals, they say. A view I can appreciate after trying to persuade French sheep to co-operate for a piece to camera for tonight's BBC News at Ten. Having herded them into the corner of a field in Picardy they simply won't bound about behind me in a tele-visually attractive manner however much I walk backwards into the flock trying to provoke them. Of course when they do oblige and bound around full of the joys of spring I fluff my lines. There is no chance of persuading them to regroup for a retake. 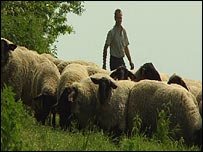 I am chasing sheep around Northern France for a report on the reform of one of the European Union's most expensive and most controversial policies.

The Common Agricultural Policy no longer takes up 70% of the EU's budget as it did in the 70s but at 43% and a cost of nearly £40bn a year, it is still the EU's most expensive policy.

Today the European Commission publishes its "health check" on the CAP which is a prelude to much more serious reform.

The sheep are grazing on a beautiful hill side near the village of Clery sur Somme. The farmer Marc Dubiquet handles the grass which brushes around our legs. He says it's only grown so high in the last few weeks. The sheep seem to be enjoying it. He tells me:

"It's very important for us farmers that the CAP's kept and indeed that the subsidies for sheep are increased. There's so much lamb from New Zealand on sale in French shops, so we have to concentrate on quality, traceability, animal health and so on which makes us uncompetitive." 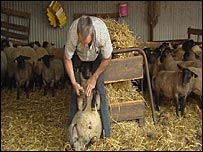 But the commission wants farmers to be more responsive to market forces, and give them subsidies not for growing specific crops or raising particular animals. They want instead to pay them for looking after the environment and by the size of fields. So if Mr Dubiquet wanted to get rid of his sheep and plant tomatoes instead, while keeping his hedgerows in order, they think he should be allowed to do so, without losing his CAP money. This is called "decoupling" in the jargon.

It's a trend that started in 2003. But it's a long haul. And Mr Dubiquet is not impressed.

"If you're telling me we could get subsidies for looking after the land and the money will stay the same, well and good. But I don't believe it: without CAP there would be no more sheep in France so we want to keep subsidies: end of story."

But it is not the end of story. Today's proposals will acknowledge French sheep farmers as a special case and will allow their government to keep paying them a subsidy. Britain is against this. The British government thinks that if Mr Dubiquet can't sell his lamb and make a profit, then that's tough. British sources say it distorts the market to keep unprofitable farmers in business. One commission source puts it more succinctly. "The British are allergic to charity." 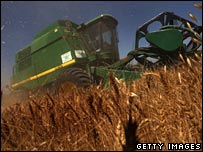 So allergic that there is real concern about a proposal in today's health check. It would allow national governments to cream off 10% of farmer's CAP money and spend it on special projects. The commission favours it going towards schemes like insurance or product promotion. But it is clear the French have other plans and Britain is worried that this will lead to "re-coupling", a new link between production and subsidies.

On the hillside, Mr Dubiquet shows us a very rusty mess tin he has just found at the bottom of the field. For this is the Somme, one of the most horrific battles of World War I. Now the sudden explosions that shatter the calm afternoon are just bird-scarers to keep crows off the cornfields. But the legacy of two world wars is clear in the Common Agricultural Policy. Europe starved and Europe went short. CAP was designed by those who want to ensure that could never happen again.

For years now it has seemed a quaint hangover from another era. But some are now saying that today's shortages and rising food prices show it's not so silly after all. The French Agriculture Minister Michael Barnier is a big fan of CAP. He tells me:

"At the end of World War II, Europe had to import its food. That's not the case now. We are able to feed ourselves and we are part of the global market for food. It's important that Europe ensures its own food security. I am not talking about total self-sufficiency but I am saying that we need to produce to feed Europe and meet the challenges of the global food situation."

He argues that there is nothing wrong in using the money of European taxpayers to protect those who might be left vulnerable by the changes suggested in the health check.

"I want to keep animal husbandry strong in France both to produce meat and milk, and to ensure the survival of rural areas. I was president of Savoy in the French Alps. It's a mountainous region so it can only produce milk. It's not economically viable but it keeps communities together."

This French insistence will be fought by the British. Indeed although the commission proposals are broadly along the sort of lines the government likes, they do not go far enough for the Chancellor, Alistair Darling. In a recent letter to his European Union counterparts he urges what amounts to the abolition of the Common Agricultural Policy. He writes calling for:

The attitude in the commission is rather "we've heard it all before." Gordon Brown was particularly famous for demanding the abolition of CAP. The Agriculture Commissioner Mariann Fischer Boels seems wryly amused:

"It's a really nice statement but it's completely politically impossible. When I saw my Darling, my new Darling's advice on the Common Agricultural Policy it reminded me quite a bit of something I've seen before. I don't know if it is a special gene in finance ministers that they want to cut all payments as low as possible."

When I meet the commissioner, she is just back from a weekend at home in Denmark. She was a farmer, her husband is a farmer and she proudly shows me her worn nails as proof she's being doing some work around the farm. She says the French will come around in the end.

"In all economic textbooks, it says when you have higher prices you get higher production and this is going to happen. Decoupling simply makes it easier for farmers to make their own decision. We are not sitting here in Brussels deciding what a farmer in England is going to produce. He or she has to look at the market and see where the demands are. I want to set farmers free. I think when farmers in France learn the profits they can make from the changes we are proposing, they will love it."

Perhaps they will. But the argument, between the two extremes represented by France and Britain, will go on long after my reluctant props on the Northern French hillside are turned into lamb chops.