As the polls narrow in the Irish referendum on the Lisbon Treaty a respected German think tank argues that a "no" vote would be a catastrophe" for Europe. 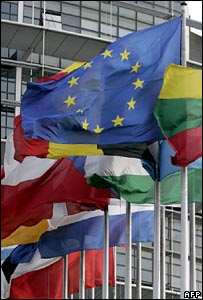 Well, like so many questions, it depends where you stand.
For those who wish their country would leave the EU, it strengthens their arm. For those who want to halt or slow down the project of further integration it helps enormously. For those who simply delight in damaging the European Union, it is a godsend.

It would provoke another big debate on why the European Union exists and whether it is fit for purpose.

But I wonder what practical effect a rejection by the Irish people would have on Europe.

The authors of the paper from the think tank, "Green light from the Emerald Isle" say that if Ireland votes "No" there are four possible consequences. (pdf link)

But it seems to me the first three of their options are variations on the same theme: vote again...

Their first option suggested in the paper is simply that: after a time the same treaty would be put again to a referendum. The authors describe this as not particularly probable. I would say "politically unthinkable.

The second and third options they identify are either amending the treaty or offering new opt-outs to meet Irish objections. The authors rightly point out that it would be a hard job working out exactly what bit of the treaty voters objected to, so this would be "highly unlikely".

And the fourth option? The European Union abandons its plans for a comprehensive treaty and makes much smaller scale changes.

Seeing this is the only option left, I presume this is what the authors consider a "catastrophe" for Europe.

A practical, pragmatic catastrophe? I never quite understood this view after the rejection of the constitution and I don't understand it now.

I don't underestimate the hurt pro-Europeans would feel. There is no question that a "No" vote would, and should, send them into an existential tailspin over the lack of popularity of the European Union. It would certainly provoke another period of navel-gazing, as boring to outsiders as someone else's psychotherapy.

But I have never grasped the desperate need for the changes contained in Lisbon and the constitution. The argument usually is that a union of 27 destined to grow larger still, would simply seize up without new rules.

Yet I started this job shortly after the rejection of the constitution, and while a lot of last year I was watching the EU designing a replacement, it hasn't been the only show in town. I have seen, and reported on, the adoption of a difficult budget, agreement on a hugely ambitious policy on climate change and carbon reduction, the expansion of the European Union to include two new countries, the adoption of the Euro by three more countries, the opening of talks about Turkey joining, the growth of the passport-free area and much greater co-operation on home affairs and justice. These are the big policy areas, but there have been plenty of more minor ones.

I stress I am not arguing that these are good or wise policies, simply that they show that the European Union is doing the things its main players want it to do without any new rules. It's doing them without a smaller commission, a new voting system, a president of the council, or the loss of national vetoes.

The rejection of the constitution was described as a catastrophe. But it was one that didn't stop the EU in its tracks. It was a funny sort of catastrophe. Would an Irish "No" be just the same?