Fire 'em, those people next door

"It's not childish, and it's not ridiculous!"

The Greek foreign minister Dora Bakoyannis had said as much during the interview and now, as I pressed the stop button on my digital recorder, she said it again.

Not for the record, but very much aimed at me personally, shaking her head forcefully and, I thought, perhaps a little sadly. 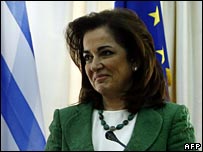 My question, earlier in the interview, had been deliberately brutal.

I had come to Athens to try to discover what lies behind the Greeks' insistence on stopping the neighbouring country calling itself "Macedonia".

An insistence that has lasted nearly two decades and climaxed last month with the Greeks using their veto to stop their neighbour joining Nato.

It infuriated the Americans and left some other diplomats regarding them in exactly the terms I used.

In Athens the view is very different.

Many see the veto as a masterstroke which could lead to the settlement of this dispute.

"It takes two to tango," says one senior Greek politician, and in the government's view Macedonia has to be forced on to the dance-floor.

The socialist opposition's senior foreign affairs adviser, Dimitris Droutsas, who worked for the party leader when he was foreign minister, is not impressed with the government or its handling of foreign policy in general.

But he likes this move: "The only leverage that exists is their ambition to become members of Nato and the EU. They are knocking on the door. Skopje now sees we mean business: Greece did not hesitate to use its veto power. It is our only negotiating tool."

Then Ms Bakoyannis told me: "Nobody would use it (the veto) lightly. People know our reason is that we want to leave behind the nationalistic ideas of the past."

When you are new in the Balkans, you wonder why Greeks keep talking about what sounds like "fire 'em". Then you realise it's not a call for harsh employment policy but their pronunciation of their preferred acronym for the state in the North.

They are talking about the Former Yugoslav Republic of Macedonia. That is the name that the Greeks have, grudgingly, accepted that their neighbour can call itself, rather than Macedonia plain and simple.

So what is it about this name business?

While I play devil's advocate and suggest to Greek politicians that "a rose by another other name would smell as sweet", they first insist that the country to the north is not a foe and indeed answer me with variations on Juliet's other contention: "'tis but thy name that is my enemy."

What's in this particular name?

The reason is quite simple. Northern Greece is also called Macedonia. The Greeks argue, with impeccable logic, that "Macedonia" is a geographical expression for a place that is mostly in Northern Greece, partly in Fire 'em (Fyrom) and with a bit in Bulgaria (and some add a tiny bit in Albania).

They say that whilst the country next door may not have real territorial ambitions on their chunk of Macedonia, accepting the name would encourage nationalist sentiment.

So we talk of "Skopje" (the capital), "our neighbour", "the country next door", "the state we are talking about".

All crop up in conversation. When one of the people I am meeting in Athens says "it's alright you can call it Macedonia", it's like "you can smoke" or "do take off your shoes".

The insistence has created low farce in high places. Greece won't allow Fyrom to be seated under "M" for Macedonia at the United Nations, and they themselves won't accept "F" for Former. So the country is seated among the "Ts", for "The".

It is very easy to mock this position, and mock people do.

American newspapers point out that there is a town in the US called "Athens" and ask if it should be renamed.

The author of a letter to the Economist suggests Greece should henceforth be known as "The Former Ottoman Province of Greece".

I ask why there is no friction between the Belgian area of Luxembourg and the neighbouring country of Luxembourg, and wonder aloud if Turkey should claim the right of ownership of all Christmas poultry.

What fascinates me about this, and it is the deadly fascination of the Balkans at the moment, is that this is not an endgame, but an opening gambit of something that will resonate for a long time.

It is the Greek contention that is they are attempting to make conditions clear now, at the beginning, that there can be no future in a Greater Macedonian nationalism.

Of course there is some history but, so unusually in the Balkans, not buckets of it dripping with blood. As so often in the region, the history is laced with anachronistic references to race and nations. 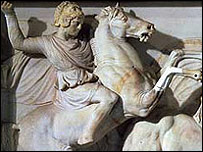 Here Alexander the Great is dragged in. It is a shame archaeologists haven't discovered his passport or birth certificate, to settle matters.

But the point is that over hundreds of years there is hardly a hint, not a whisper, of territorial ambition from those up south to those down north, to explain why The Name looms so large.

But the Greek government does point to a pivotal moment in their history to justify their stance. The foreign minister tells me:

"The unification of geographical Macedonia was Tito and Stalin's idea, mainly because they wanted access to the Aegean Sea. It was one of the reasons we fought our civil war and the ideas which were put up by them for the unification of Macedonia must be buried in the past with them.

"This is very important because we are not talking about ancient history but the history of people who are still alive and who fought a civil war for democracy along with the British and the Americans helping us. So what we are saying is not childish and is not ridiculous."

A 1944 memo from the US State Department is produced in support. It notes "with considerable apprehension" that Yugoslav partisans and the Bulgarians are arguing in favour of an independent Macedonia as "a possible cloak for aggressive intentions against Greece".

But Tito and Stalin are dead, and so, moreover, are the empires they built.

If any outside power has a sneaky reason to create a Greater Macedonia now I can't see who it would be or what strategy they could be pursuing.

It's obvious the tiny, new state doesn't pose any military threat to Greece, which by comparison is a super-power.

There are scant signs of any expansionist movement, no evidence of even wacky terrorist groups, although the Greeks point to a recently declassified American intelligence document from 1990, talking about a "spectacular growth of Macedonian nationalism" and stating "the potential for an international crisis is manifest".

They also say that government-backed books are produced in Macedonia talking of a greater state and that the prime minister there was seen laying a wreath in front of such a map showing Greater Macedonia.

Dora Bakoyannis is insistent that Greece is a huge investor in the country and wants it in Nato and the European Union. She says this is about preventing trouble in the future, preventing the rise of a dangerous nationalism.

"It has to be clear that it's a very destabilising idea. Destabilisation in this region doesn't mean that you have an army in 2008 and you invade. The danger is from the argument."

I wonder if there is at least as great a danger of creating or exacerbating that nationalism by the intense focus on the name that cannot be spoken.

No-one I talk to in Greece is anything less than passionate on the subject, and there is no sense of weariness over the argument.

But I get the strong sense that the scant evidence is being gathered up and offered because successive Greek governments have backed themselves into a corner.

Ms Bakoyannis acknowledges her father fell as prime minister because he was urging compromise and says her most difficult moment was telling parliament of a softening of the line.

The conservative "New Democrat" government is in a precarious position anyway, and much of its support comes from Greek Macedonia, where feelings run high.

The old, socialist establishment thinks the current crop of ministers has been rather too weak on the issue.

The government can't now, after all these years, back down and lose face in a dispute with a much smaller neighbour.

Deal or no deal?

So what are the prospects for a deal?

None before Fyrom's elections on June 1st, I would have thought.

UN envoy Matthew Nimetz is in the region and talks to the Greek foreign minister hours after my interview.

He's had some jobs near the top of American politics: an aide to LBJ, under secretary in charge of nuclear non-proliferation and a commissioner of the New York Port Authority.

But for the last 18 years, much of his life has been devoted to finding an acceptable name for Greece's small neighbour to the north and he says, I imagine with some relief, that a solution is not "months and months" away.

The two sides are closer than before. Would the foreign minister accept the Republic of Northern Macedonia or Republic of New Macedonia, for instance?

"New Macedonia, North Macedonia: names like this, of course, meet our proposal which is Macedonia with a geographical objective. That means they will not monopolise the whole of Macedonia. I would never accept that the Greek position is a childish position. Whoever has an opinion about the region, we are the neighbours, we have to live here."

This year we will see whether the letters FYROM are to become one of those peculiar footnotes of history or a running sore that creates tensions long into the future.

But what's your view about the importance of a name of a nation?