A monument to the British craftsman

The ghost of Sir John Betjeman will be grinning from ear to ear tonight as it hovers among the guests at the grand opening of the St Pancras Renaissance Hotel in North London. 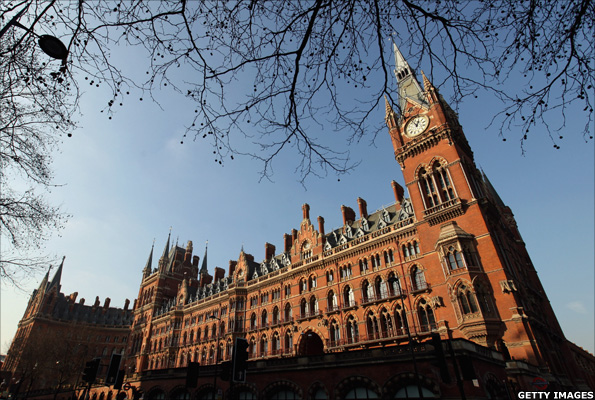 Not only does the event mark the climax of a project to rescue and resurrect a building the poet personally sought to protect from the bulldozer barbarians of the sixties, it also glorifies an extraordinary monument to the skills of the ordinary English working man. 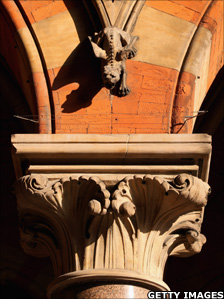 The George Gilbert Scott masterpiece, with its Hogwarts-style Gothic spires and gargoyles, is a reminder of Victorian self-confidence and dynamism. But the building also looks forward, encouraging optimism for a new golden age of railways and a celebration of British craftsmanship and endeavour.

The story of what began as the Grand Midland Hotel is a journey through the ups and downs of 150 years of British history, beginning amid the clanging social turmoil of the industrial revolution. Rapidly expanding English towns and cities were competing with each other for dominance as the railways transformed the economic landscape.

In the East Midlands, pit owners and factory bosses were determined their region should not miss out on the exciting opportunities for trade and prestige. They built a train line north to Leeds, south towards London and with links radiating across the United Kingdom, engines thundering to South Wales, to Southern England, to Scotland. The Midland Railway became the largest coal haulier in the land and felt no need to follow its competitors in moving its Derby headquarters to the capital. The owners were proud men with a deep loyalty to their regional roots.

In 1863 the company was granted Royal Assent to build its own line and terminus in London and purchased land at St Pancras, bang next door to its arch-rivals, Great Northern Railway's station at Kings Cross. Construction required the demolition of many houses; the working-class inhabitants expelled without compensation and forced to settle in nearby slums. The necessary excavation of a local graveyard added to the misery - the building site became amassed with open coffins and bones, workers surrounded by decomposing bodies. 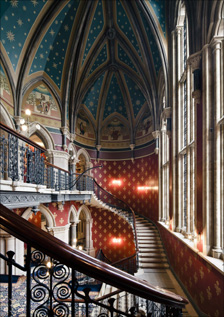 It was a shocking episode by today's standards, but the investment promised a neglected and squalid corner of the capital would emerge regenerated. The men from the Midlands saw this as the opportunity to promote their region and rub some of its success in the noses of their rivals. In May 1865, the railway company launched a competition for a 150-bed hotel to be built within sight of GNR's Great Northern Hotel.

George Gilbert Scott, an architect better known for his ecclesiastical works, submitted a design that must have seen jaws drop: a quite staggering vision of neo-Gothic extravagance that blew the minds and original budget of the Midland railwaymen. It was an audacious submission, but Scott knew how to play to the conceit of his paymasters. He promised that the station would eclipse every other terminus in the city and would stand as a monumental advertisement for the enterprise and industry of their region. The red bricks, the signature material in his new creation, would be manufactured in the Midlands.

As the hotel's own history relates: "It was too much for the Midland to resist. The railwaymen took a deep breath, dug deep into their pockets and gave Scott's vision the 'clear' signal."

The Gothic revivalism presents something of a paradox: the building was the product of industrial wealth but its architecture was a reaction against machine production and industrialisation. Scott was celebrating medieval craftsmanship with an architectural style also infused with Christian conservative values. For five years, builders, stonemasons, carpenters and artists laboured to bring his design to life; the result a station that became known, fittingly, as "the cathedral of railways". 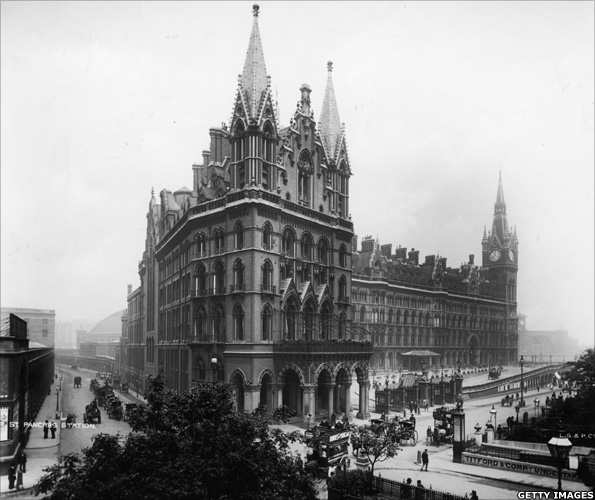 St Pancras was, in many ways, the apotheosis of the golden age of steam travel, a time when engineers were superstars and every town or city worth its name boasted a station and at least one railway hotel to welcome tourists and businessmen. The Midland's wagons shifted coal from the rich Nottinghamshire and Yorkshire seams, transmitting industrial power throughout the United Kingdom and across an empire. Their passenger services, meanwhile, promised romance and luxury.

But then, like Britain itself, the Midland Grand struggled to adapt to new ideas and new technology. The hotel's concrete structure was too stubborn to be altered for a clientele which increasingly craved privacy and modesty. Scott's design meant guests had to share washing and toilet facilities, five bathrooms served the 300 bedrooms. Twentieth century patrons demanded en-suite. The Midland Grand put a potty under the bed.

Unable to install the necessary plumbing, the hotel tried to woo guests with a Moroccan coffee house and an in-house orchestra. But it wasn't enough and in 1935 the owners accepted the inevitable and closed its doors. After surviving the war relatively intact, the building was used as offices by the nationalised British Rail, dreary state austerity clashing with the opulence and faded grandeur of Scott's vision. Much of the original stencilling and paintwork was simply whitewashed over and the stone pillars boarded up. 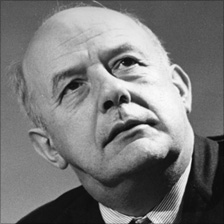 In the 1960s city planners ridiculed the hotel as indulgent, outdated and an obstacle to efficient development. There were moves to tear it down and replace it with brutalist office buildings. Enter Sir John Betjeman.

As a founder member of the Victorian Society with architectural historian Nikolaus Pevsner, Betjeman mobilised a popular campaign against the demolition plans and, despite his fear that St Pancras was "too beautiful and too romantic to survive", managed to secure Grade 1 listing for the building in 1967.

Now, 138 years to the very day since it first opened its doors, the Midland Grand is reborn as the St Pancras Renaissance, Scott's vision painstakingly and meticulously restored. The £150m renovation transports us back to an age when English railwaymen commissioned a staircase that takes the breath away, sweeping past marble pillars and golden fleur-de-lis decorated walls to a painted ceiling adorned with the Seven Virtues - wisdom, justice, courage, temperance, faith, hope and charity. The developer, Harry Handelsman, must have exhibited many if not all seven qualities to see the project through. 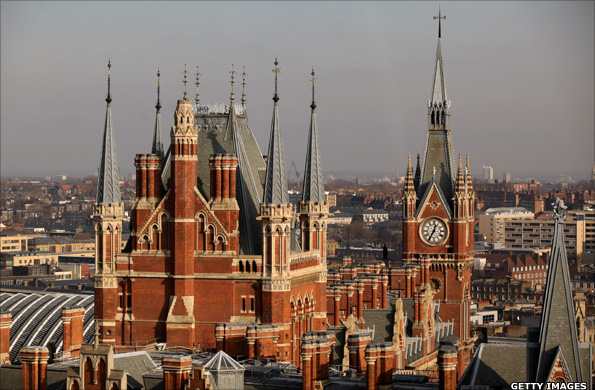 This is not simply an exercise in nostalgia and sentiment. The building celebrates contemporary British craftsmanship and cuisine, offering an optimistic vision for our railways and hospitality industries.

The "Eurostar Generation", as the train company operating literally outside the hotel windows likes to describe its market, will decide whether the hotel can prosper once again. High-speed rail travel and the tunnel links to Brussels, Paris and beyond have given rise, it is claimed, to an "explosion of cultural exchange", bringing art and good cooking and friendship and business to and fro across the Channel.

Last year, defying the weather and the recession, Eurostar carried a record 9.5 million people, prompting its Chief Executive Nicolas Petrovic to claim "a real renaissance in rail travel".
The company recently welcomed its 100 millionth passenger: he lived in North London, had a French wife and daughter and was heading to Lyon for a family wedding - the epitome of the Eurostar generation, perhaps.

With air travel's image scarred by a deep carbon footprint and frustrating security, and with petrol prices historically high, the railways are booming: more British passengers are travelling further by train than ever before.

There are industry claims that the luxury hotel business is also "about to enter a golden age" with one analyst suggesting that multinationals like InterContinental, Wyndham, Hilton and Marriott (which owns the St Pancras Renaissance) will each have more than a million rooms by 2020. Across Europe, the concept of the railway hotel is taking off again. In Lille, a down-at-heel industrial backwater now thriving thanks to the arrival of the Eurostar, major hoteliers jostle for trade around the central station.

What might please the board of the old Midland Railway most of all, however, is that their terminus has helped breathe new life into cities like Derby, Nottingham, Wolverhampton and Huddersfield, places struggling to find new markets in troubled economic times and quick to spot opportunity down the tracks. The project is also promising to contribute to the current regeneration of the run-down Kings Cross area, echoing the station's original ambition for the neighbourhood.

St Pancras was the gift of proud men from a proud English region. Tonight their ghosts may join those of Sir John Betjeman and Sir George Gilbert Scott, ethereal knights beaming at a restored monument to the skill and artistry of the British working man.

PS A couple of people have suggested I thought Wolverhampton was on the East Midlands line.  Actually, the point I was making is that, according to rail industry analysis, Wolverhampton residents have been among the most enthusiastic in purchasing through-tickets to Belgium and France.  The Eurostar Generation resides in Mercia!