Is Nick Clegg a hypocrite?

"It is easier to dispose of an opponent's character by exposing his hypocrisy than to show that his political convictions are wrong." I can imagine that Nick Clegg might take some comfort this morning from the words of American political theorist Judith Shklar writing in 1984. 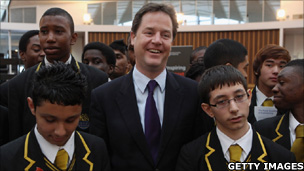 The deputy prime minister is duffed up in many of the papers today for trying to prevent the middle classes from using their connections to get their children valuable internships - after he benefited from just such an arrangement.

The charge is that he is a hypocrite - trying to deny to others what he enjoyed himself. But does the accusation really hold water? Are we saying that no politician can ever pursue reforms to a system because he or she is a consequence of that system?

Many Labour politicians were and are products of grammar schools. Harold Wilson, Dennis Healey, Barbara Castle and Gordon Brown benefited from such an education. Is it then hypocritical for them to argue for an end to grammar schools?

I will guess that those who wish to see more such establishments will say "yes" and those who would have fewer will say "no". In other words, the accusation of hypocrisy is used as a way of avoiding the argument rather than engaging with it.

David Cameron has never denied that he was hauled before the headmaster at Eton having been caught smoking cannabis in 1982. I don't know whether the would-be PM derived any pleasure from his encounter with illegal drugs, but it would surely be perverse if that incident prevented him from campaigning against pot-smoking today.

Similarly, until (as he tells it) 1.45pm on the day in March 1980 that he married Cherie Booth, Tony Blair smoked cigarettes. Should such a past have excluded him from any political activity designed to reduce cigarette smoking among others?

The origin of the word hypocrisy is Greek - hypokrisis - and thought to mean "playing the part". In other words, it is about acting one way in public and another behind the scenes. There is a requirement in the true hypocrite, it seems to me, for the two states to exist simultaneously.

An accusation of hypocrisy against Al Gore promoting his film about global warming, An Inconvenient Truth, while criss-crossing the planet in jet-liners may be fair or unfair. But it is, at least, an accurate use of the word. John Major's "Back to Basics" campaign was interpreted as a call for a return to old-fashioned values. Again, fair or unfair, the allegation of hypocrisy related to the questionable moral behaviour of ministers, including the PM, at the time.

What hypocrisy cannot be, surely, is a charge against anyone whose past contradicts their views in the present. If that were so, no-one would ever be able to change their mind or challenge the circumstances of their upbringing.

William Wilberforce, the great reformer, spent his student years gambling and drinking. A religious and spiritual conversion in his twenties saw him become a formidable campaigner against such "immorality". Was he a hypocrite? 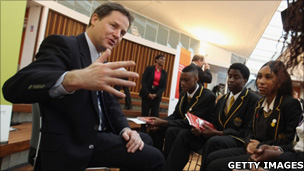 In his book Political Hypocrisy: The Mask of Power, the academic David Runciman explores the history of the vice "from Hobbes to Orwell and beyond".

It is a relatively gloomy view of human nature and the motivation of politicians, but he makes the point that: "Because people don't like hypocrisy, and because hypocrisy is everywhere, it is all too tempting for democratic politicians to seek to expose the inevitable double standards of their rivals in pursuit of power and votes."

Negative advertising, he suggests, is the most obvious contemporary example of this: "If you wish to do the maximum possible damage to your political opponent in thirty seconds of airtime, you should try to paint him or her as a hypocrite: you must highlight the gap between the honeyed words and the underlying reality, between the mask and the person behind the mask."

Nick Clegg, however, does not disguise the fact that he benefited from an expensive private education and all the advantages of well-connected parents. He would argue, with some justification, that he is not trying to hide or deny his past.

Indeed, it would be tempting to suggest that the accusations of hypocrisy over his internship come from some of those who would rather not see that particular route of middle-class privilege closed: a case of playing the man, not the ball.