Happy evangelists take on the cynics

"I promise to try and produce more happiness in the world and less misery."

As a statement of intent, the above pledge, made by those joining the new movement Action for Happiness launched today, seems uncontroversial

But we live in the UK, a country which has won gold medals for cynicism, and I am prepared to guess that among the posts which follow this article will be suggestions that there is something deeply un-British and probably underhand about a campaign to spread joy and reduce suffering. 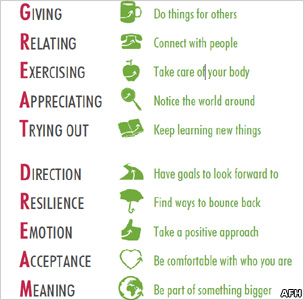 Britain is more distrusting of politicians, the media, public institutions and each other than most other countries. We seem hard-wired to question the motives of anyone who steps into the public arena and so it was no surprise that when I mentioned the Action for Happiness launch to colleagues at the BBC there were more than a few who said they suspected it was all part of some plot by the government to brainwash us out of austerity gloom.

Actually, I think it is far more interesting and ambitious than that. Action for Happiness says it "hopes to inspire a mass movement for fundamental cultural change". One of its founders, the economist and Labour peer Professor Richard Layard, told me he thought it was needed because of the failure of organised religion to turn back the "tide of narrow individualism".

He believes the evidence-based principles of the organisation might help deliver the ideals of the Enlightenment, when great British thinkers, including Jeremy Bentham and John Stuart-Mill, were arguing that "the good society is one where there is the most happiness and the least misery".

The suggestion that happy science offers a more effective route to personal and social wellbeing than religion might be controversial in some quarters, but there is something evangelical about the movement. The pledge I quote at the top is a prosaic form of many solemn and sacred oaths. And the "ten keys to happier living", shown above, have echoes of the Decalogue, although the encouragement to "find ways to bounce back" perhaps lacks the majesty of the Ten Commandments.

But there is another echo for me - my time in the Scouts. Just as I promised to "do my duty", to "be prepared" and "do a good turn daily", so Action for Happiness encourages volunteering, resilience and awareness.

Lord Baden-Powell's mission was, like so many of the initiatives spawned as the 19th century ticked over into the 20th, to encourage community well-being at a time of great change. The founding of the Football Association is another example, part of a flowering of social entrepreneurism that David Cameron would like to see repeated today.

Action for Happiness is not a political organisation in the sense that it is linked to government or opposition. It does, though, want to profoundly to change the way people behave. Its rejection of the idea that more cash would lead to a happier country inevitably raises eyebrows as Britain tightens its belt. But the organisation's founders were preaching the same message in the boom. Arguably, it is a message that has been around for at least two-and-a-half thousand years.

The movement attempts to counter contemporary cynicism with practicality, offering simple ways to give our own lives and those of our friends and neighbours greater fulfilment and meaning. There is certainly a growing body of science to back up many of the ideas, but that won't stop many people assuming some ulterior motive.

So, do you want to spread a little happiness? Here are a few ideas the experts reckon might work: 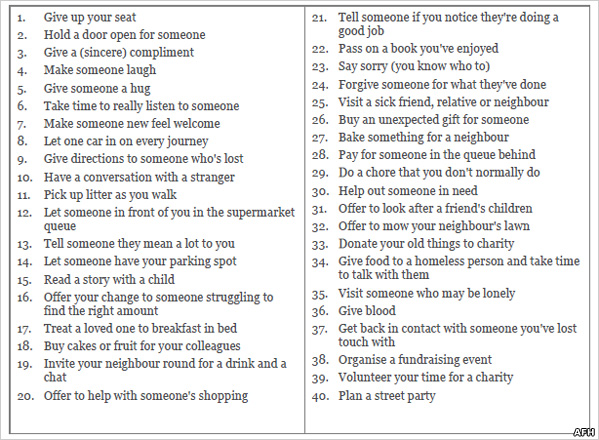