Police efforts to fight drug gangs tend to lead to more violence and an increase in murders, according to a new international study.

The authors, writing in the International Journal of Drug Policy, admit they were surprised by their own findings.

Their hypothesis was that the results "would demonstrate an association between increased drug law enforcement expenditures or intensity and reduced levels of violence". But that's not what they showed. Instead, they report:

"From an evidence-based public policy perspective and based on several decades of available data, the existing scientific evidence suggests drug law enforcement contributes to gun violence and high homicide rates and that increasingly sophisticated methods of disrupting organisations involved in drug distribution could paradoxically increase violence."

Following a systematic review of 15 peer-reviewed studies in North America and Australia, the researchers at the University of British Columbia argue that policy makers must find "alternative regulatory models for drug control... if drug market violence is to be substantially reduced". 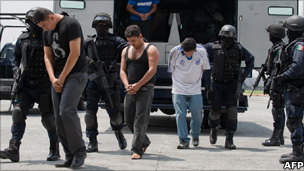 A version of the report was produced last year. Now an updated and peer-reviewed paper has been published and will be presented to a conference of drug experts in Beirut next week.

As the authors concede, their findings fly in the face of conventional wisdom and appear paradoxical. However, they have theories as to why the so-called "War on Drugs" may be making the world a more dangerous place.

One possibility, they say, is that: "by removing key players from the lucrative illegal drug market, drug law enforcement has the perverse effect of creating new financial opportunities for other individuals to fill this vacuum by entering the market."

The very act of disruption, they suggest, creates a more violent climate: "As dealers exit the illicit drug market, those willing to work in a high-risk environment enter, and that street dealing thereby becomes more volatile."

It is a problem well understood by Britain's Serious Organised Crime Agency (Soca), which already tries to factor in the unintended consequences of intervening in a drugs market.

I wrote about this in 2009, revealing how one senior agent had listed the possible negative implications of seizing, say, a large shipment of heroin:

While recognising the harm that disrupting narcotics gangs can unwittingly cause, Soca does not accept that drug law enforcement is counter-productive. Around the same time, the influential think-tank UK Drugs Policy Commission was publishing a report suggesting that police might "tolerate" some drugs markets rather than risk the violence that would flow from breaking them up.

This week's paper from the University of British Columbia reminds readers of the steep increase in gun-related homicide that followed alcohol prohibition in the United States in the 1920s, and the spike in murder and violence that followed the dismantling of Colombia's Cali and Medellin cocaine cartels in the 1990s.

"In this second instance," the report's authors note: "The destruction of the cartels' cocaine duopoly led to the emergence of a fractured network of smaller cocaine producing cartels that increasingly used violence to protect and increase their market share."

The authors suggest that such violent crime "may be an inevitable consequence of drug prohibition when groups compete for massive profits without recourse to formal non-violent negotiation and dispute-resolution mechanisms".

Another theory to explain the paradox is that if the police get tougher, the drug dealers respond by getting more brutal themselves: "Target hardening, wherein vulnerable entities become increasingly militarised in the face of risk of attack, has occurred among drug organisations facing increased drug law enforcement," the report says.

The authors accept that there are some inevitable shortcomings in their analysis. Most of the studies they looked at involved longitudinal research without a randomised control group. In other words, they couldn't compare the results with what would have happened if there had been no drug law enforcement and therefore cannot state that police action against drug gangs actually causes violence.

Another limitation they considered at the beginning of their review was the risk of "publication bias". They noted that research funders "have traditionally been unsympathetic to critical evaluations of the 'war on drugs'," and that, as a result, there might be a lack of critical evaluation of potential negative consequences of drug law enforcement.

They needn't have worried. Of the eleven studies that analysed empirical data, 10 found "a significant association" between drug law enforcement and violence. The only paper that described "drug law enforcement having a positive effect on reducing drug market violence was based on a theoretical model" rather than hard data.

The clear sub-text of the analysis and its exhortation to policy-makers to find "alternative regulatory models for drug control" is that governments should consider decriminalisation or legalisation of illicit substances.

Since, politically, an end to the policy of prohibition is not on the table in Britain, the question is how police and crime agencies ensure that their actions don't end up making a bad situation even worse.