"Overall, how happy did you feel yesterday?" We learned this week that that is one of four new questions being inserted into the Office for National Statistics (ONS) Household Survey as the UK's official number crunchers try to assess the well-being of the nation.

The purpose of this exercise is not to get Britain thinking happy thoughts as the axe falls: the determination to measure well-being pre-dates both the coalition and the age of austerity. The real point is to find a better way of measuring social progress than simply how much stuff we have got. There is a public consultation here.

The problem is exemplified by this graph comparing our wealth with our stated level of life satisfaction. Basically, we have got a whole lot richer but no happier. Arguably, we have become more miserable. 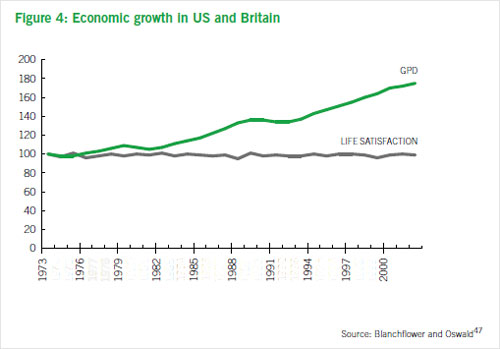 Once we have agreed on a good way of measuring well-being, the idea is that we can then use it to shape our public policy. A paper published by the ONS this week suggests that governments will need "detailed measurement of well-being to show the costs and benefits of different allocation decisions".

The research imagines how well-being data might be used "for the ranking of options across very different policy domains" and "could be used to decide which forms of spending will lead to the largest increases" in the nation's happiness (they prefer the term subjective well-being - or SWB in the jargon).

Some research has already been done on how using well-being rather than wealth might change policy decisions. Last week the think tank NEF (New Economics Foundation) published an excellent report "Measuring our progress: The power of well-being" which included a few thoughts on exactly this.

Unemployment, particularly in men, has been shown to be very bad for well-being. The NEF analysis suggests that its impact is so great that maximising happiness means that "minimising unemployment should be made even more of a priority than it already is".

Some new areas for policy-makers emerge from happiness research. A number of studies have shown strong correlations between well-being and getting enough good quality sleep. The NEF research suggests that sleep "could be given attention if promoting high well-being were treated as the ultimate goal of policy".

"While sleep quality seems a textbook case of a problem that can only be addressed in the private realm, former Harvard President Derek Bok has argued that the subjective well-being evidence means that it should to be treated as a policy priority. He suggests actions to address it across the spheres of public education, medical training, and research funding. Other research suggests that actions to address noise pollution and promoting the sleep-related benefits of exercise (e.g. through public health campaigns) would also result in improvements."

Work and sleep then - two areas that might benefit from a focus on well-being. But NEF come up with another - bicycles. Before we get into the saddle on that, let us consider one of the strongest correlations between activity and happiness - commuting. 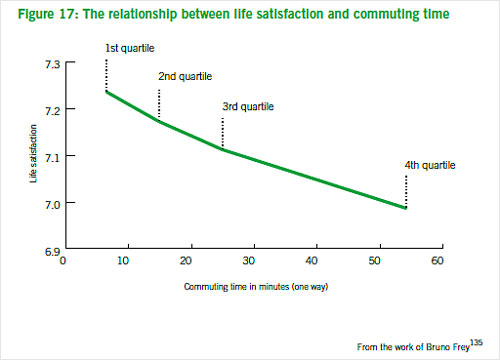 This graph, reproduced in the Young Foundation's report last year "The State of Happiness", sums up the research. The longer they commute, the more unhappy people are.

The NEF report takes this idea a bit further and suggests we should introduce policies to get us out of the car and onto the bike.

"A wealth of literature from researchers studying stress and related effects reveals 'persistent and significant costs associated with a long commute through heavy traffic'. By contrast, studies comparing the experiences of commuting by bicycle and car report that cyclists find their mode of transport at least as flexible and convenient as those who use cars, with lower stress and greater feelings of freedom, relaxation and excitement."

A couple more graphs cited in the Young Foundation report hint at other areas where a well-being agenda might shape policy. 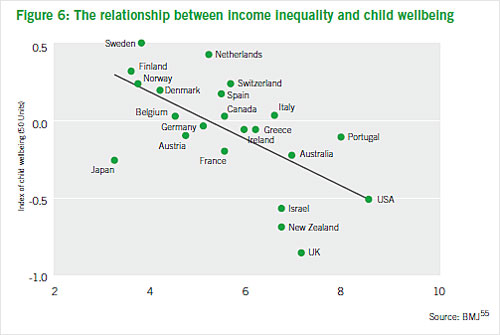 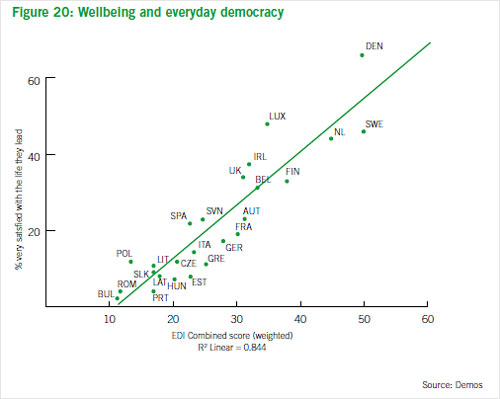 That last graph is, perhaps, an advert for the Big Society while the previous one on inequality suggests progressive taxation is good for happiness.

As the Young Foundation put it: "Well-being is not strongly associated with high pay in itself, although it is linked to earning more than people around you, an effect that decays over time. Increasing tax likewise can be seen as a transfer of well-being. Shifting disposable income from the well off to the less well off, should equate to a small loss of well-being from the wealthy and a big gain in well-being by those on lower income."

One man's happiness is another man's tax demand.