Is Britain looking for a fight?

Britain's reputation for dealing with the challenge of austerity is summed up by that now-ubiquitous poster echoing our legendary wartime spirit: Keep Calm and Carry On. 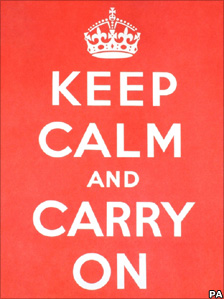 Yesterday's feisty protests made headlines around the world in part because the pictures of British bobbies holding the line against wild-eyed troublemakers are at odds with the accepted wisdom about the UK's response to the financial squeeze.

The Washington Post notes today how "many observers were surprised by the violence in central London because the British public had thus far been more tolerant of cuts than their counterparts in nations such as France and Greece".

A few weeks ago in the same newspaper, the columnist Anne Applebaum compared the response to spending cuts in Paris and London:

"In an age of supposed globalization, when we are all allegedly becoming more alike - listening to the same American music, buying the same Chinese products - it is astonishing how absolutely British the British remain and how thoroughly French are the French. Both countries need to change state spending patterns and cut budgets to cope with economic crisis. Faced with this challenge, the British have stiffened their upper lips - while the French have taken to the streets."

Yesterday's violence will have blurred that distinction a bit, but the essential truth remains: Britain appears to be trying to stay calm and to carry on. Despite the mindless aggression of a small group of "protest junkies", the country does not seem to be in the mood to fight. 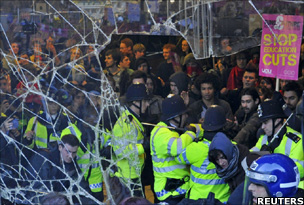 Why is that? After all, the emotional drama of an old-fashioned student demo turning ugly provided pictures which shunted the story of a protest march against tuition fees from a few paragraphs on page 17 to the front page of every paper.

In that sense, violence works: questions in Parliament; media debate; water-cooler conversations. A few broken windows have prompted tens of thousands of words on the fairness of university funding proposals (as well as many more "why-oh-why?" pieces about angry young men).

Partly, I think it is because we are not a demonstrative people. Yes, there are groups of semi-professional trouble-makers: football hooligans, anti-capitalists, anarchists and racists among others up for a ruck. The British mainstream doesn't, by and large, "take to the streets".

Anne Applebaum, reflecting on the protests which greeted the spending review last month, noted how the protestors "looked suspiciously fringe" and "many waved signs advertising the Socialist Worker, a newspaper nobody reads".

There is real anger about the cuts, deep anxiety too. But there is, as yet, no obvious focus for that opposition. The influence of trade unions and political parties is diminishing; our society has become more individualistic than collective.

Opposition to the Iraq War cut across class, age and creed. The huge marches which snaked through London under "Stop the War Coalition" banners had a simple and clear aim. But the cuts to state services are by their nature more diffuse and public attitudes on the need to make savings seem to have become broadly accepting.

David Cameron will not have been surprised by yesterday's violence, though. He knows that as the state withdraws, pain and anger will be revealed. Some will try to exploit the moment looking for a punch-up. But his message to ministers and senior civil servants is clear: hold your nerve.

In a speech to Whitehall mandarins in July, the prime minister told them that he did not want them to try and protect the quality of public services after the cuts:

"Let me be very clear: I do not want you and your colleagues to think your role is to guarantee the outcomes we want to see in our public services - or to directly intervene in organisations to try and improve their performance."

Just imagine the reaction of public officials who had dedicated their lives to making state services more effective. The new boss had come in and told them that that wasn't the point anymore.

So, when the cuts really start to bite, people will respond the way they have for generations. They will demand the government "do something". They may march on Downing Street demanding change. A few hotheads may attach themselves to the demos in the hope of a fight.

But Whitehall is under instruction to be deaf to their pleas. It is no longer the job to step in with some scheme to protect people from the cuts, however cross they are.

As David Cameron told them:

"If you want to set targets, set new controls, impose new rules - don't bother, because you're likely to get the red light."

There will be lots of protests over the next few years. Some will get a bit fruity. But, at the moment, I struggle to see how opposition to the age of austerity can move from small-scale demos to the kind of national movement that brings millions onto the streets of France or Greece.