In search of Middle England

Middle England, we are told, will suffer as a result of the changes announced to child benefit. But where is Middle England? 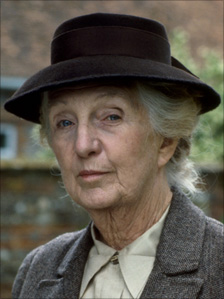 The phrase conjures up nostalgic images of 1950s Britain: Miss Marple keeping a close eye on the neighbours as she prunes her damson; John Major's picture of "the country of long shadows on county grounds, warm beer, invincible green suburbs, dog lovers and - as George Orwell said - old maids bicycling to Holy Communion through the morning mist."

(It was a rather selective quotation from Orwell who also referred to the "clatter of clogs in the Lancashire mill towns, the to-and-fro of the lorries on the Great North Road, the queues outside the Labour Exchanges", but no matter.)

Middle England, one supposes, is a comfortable place, neither rich nor poor. Conservative. Law-abiding. Decent. It is in the middle.

For the purposes of this UK blog I am going to assume that Middle England really means Middle Britain and I suppose what we are talking about is a place where people live on middle incomes.

In the spirit of Miss Marple, I have been searching for clues to its location so I can try to divine how, statistically, residents of Middle England will be affected by withdrawing child benefit to households which include someone earning more than £43,875.

David Cameron said this week: "I'm not saying that people on £43,000 are rich - they're not" but it was clear he regarded them as "better-off" and, as such, wealthier than middle earners.

Most people have no idea what the median (middle) income for adults in the UK is. That's because, for reasons I don't quite understand, none of the thousands of official statisticians paid to keep an eye on the nation's wealth are asked to calculate it.

My search for an answer started at the Office for National Statistics and ended at the Treasury via the Department of Work and Pensions. No-one so far has been able to provide me with a number. We use the phrase all the time but it is not a recognised as an important bit of data.

I can tell you what the net (after tax) middle income is per week. Have a guess? Don't peek. How much do you think? The answer is...

Yes, line up all the weekly net incomes of all the adults in the UK and the number in the middle is £223. But there are methodological questions about this number.

The calculation includes people who are out of work and pensioners. It also includes all those adults who rely on someone else's income. Millions of parents who look after children full or part time while their partner goes out to work count as having a low income. Lady Leisure, wife of the billionaire pork-belly magnate, might also appear to have an income close to zero.

So official number crunchers [1.20MB PDF] have come up with a way of taking account of the "household" effect. The measure is called "equivalised household income". This formula pushes up the mid-point on the line to £407 per week. 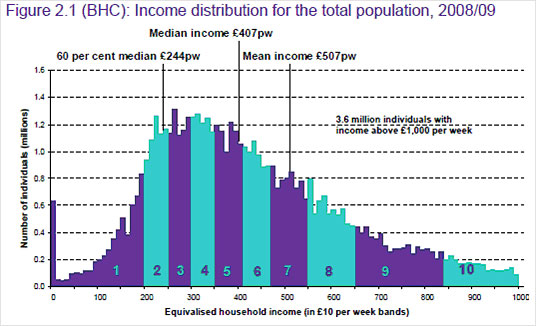 This graph illustrates the income profile for Britain before housing costs but after tax. It shows that the vast bulk of people have a net income of between £200 and £450 a week. No £10 band outside this range includes more than a million adults. 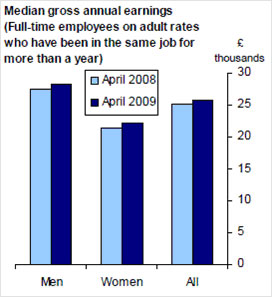 If one were to look at earnings - we only count those people in work - a Middle England resident [203.79KB PDF] would have a gross salary of £25,800 which comes to about £380 a week after tax. To put it another way, it would require a 70% pay rise for a 'middle earner' to get them to the point where their household might lose child benefit.

Finding Middle England, though, is complicated by the fact that local rents and house prices vary widely across the country and obviously have a big effect on a household's disposable income. One could argue that Middle Britain is the place with middling spending power.

Gross Disposable Household Income (GDHI) is an official calculation of what a household has to spend after tax and housing costs [1.77KB PDF]. The most recent figures show the average GDHI per head across the UK is £14,872.

So where in Britain would one typically find households with that level of disposable income? It is certainly not inner London where, despite some of the most deprived neighbourhoods in the country, average GDHI is £22,135. It is not the stockbroker belt where it is between £17-18,000. 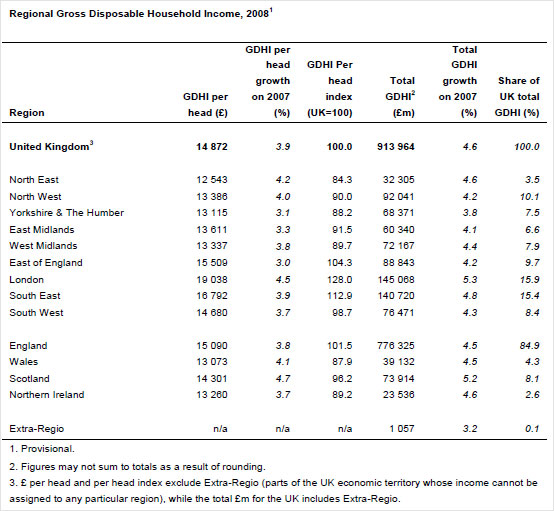 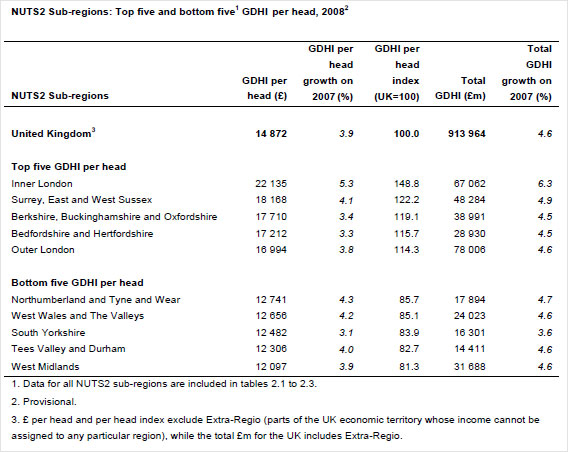 The regions closest to the average are the West Country and East Anglia. Middle England is not Great Missenden. It is Great Yarmouth. It is not St Albans. But it just might be St Mary Mead in Devon. Home, of course, to one Jane Marple.