Should drugs policy be based on facts or opinion?

Should Britain's strategy to reduce the harm from drugs be based on scientific evidence or public opinion? When the issue came up during the course of a Parliamentary debate on "legal highs" last week, there was an interesting insight into how the previous Labour administration viewed matters. 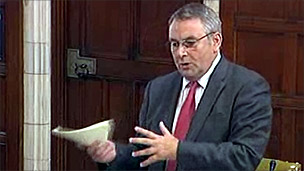 The Liberal Democrat MP Tom Brake stood up to ask a question of the shadow home office minister Alan Campbell.

"I seek reassurance that when sound, factual evidence is produced to show what is effective in tackling drug crime and addressing health issues, the hon. Gentleman will sign up to that."

Mr Campbell, who was, until the election, the Labour government's voice on drugs and crime, thought he detected a trap.

"I cannot give the hon. Gentleman the assurance he seeks because he is sending me along a route he knows I cannot go down."

The route, of course, was towards decriminalisation or legalisation of currently illicit drugs.

Mr Brake, a member of the Home Affairs Select Committee, recently travelled to Spain and Portugal where the possession of drugs is no longer a criminal offence. The question behind the question was "if it works there, would he support doing the same here?" (I blogged from Portugal last year.)

"It is no bad thing to learn lessons from abroad," Mr Campbell replied, "but we need a drugs policy for this country that reflects the evidence and takes into account the views of the public."

What happens, though, if the "evidence" and "public views" are in opposition? Mr Brake went in for the kill.

"Will the hon. Gentleman go on the record and confirm that if a policy is backed by clear, evidence-based research that shows the most effective way of tackling drugs to be something that the public do not support, he will back the public rather than scientific fact?"

It is the question that lies behind so many of the arguments about current drugs policy in Britain. The former home secretary's dismissal of Professor David Nutt as chairman of the Advisory Council on the Misuse of Drugs last autumn prompted a public battle between scientists and politicians over exactly this point. (See previous posts.)

"Politicians always think that they back the public because they hope the public will back them," Mr Campbell replied.

"We can take the evidence, but we must also take into account what the public think about such matters. There is an argument to say that scientific evidence alone can be collected on the harm that a drug would do to someone's health, and that the judgment can be made entirely from that. However, that is not the basis on which the advisory council is set up. Other factors must be taken into account, not least the attitude of the public, which I hope is informed by the evidence, as the hon. Gentleman suggests it will be."

Mr Campbell's hope that the public's attitude "is informed by the evidence" will have had many experts in the drugs field shaking their heads, however.

When the new drugs minister, James Brokenshire stood up to speak at the end of the debate, he was adamant that the coalition had no intention of going down the Portuguese route.

"The Government are opposed to the legalisation of drugs and to decriminalisation for personal use" because "illegal drugs are harmful and no one should take them".

"To legalise their supply for personal consumption would send the wrong message to the majority of young people, who do not take drugs on a regular basis, if at all, and, alongside that, it would increase the risk of drug use and abuse. On the specific point about the Portuguese model, we are against that proposal."

Interestingly, the new head of the United Nations Office on Drugs and Crime (UNODC), Yury Fedotov, took up his post only three days ago, promising to "place a strong emphasis on safeguarding health, human rights and justice in drugs and crime policy".

Calling for a period of consolidation at the body which polices the international treaties underpinning global drugs policy, Mr Fedotov appears supportive of his predecessor's view that "people who take drugs need medical help, not criminal retribution".

Also this week, the former Spanish Prime Minister Felipe Gonzalez called for global action to legalise drugs. He acknowledged that "no country can take this decision (to legalise drugs) unilaterally without an extremely serious (political) cost for its leaders.

"What is needed therefore is an international treaty that is respected by all," he said.

It is also worth recalling that, as a member of the Home Affairs Select Committee inquiry into drug misuse in 2002, David Cameron voted in favour of a recommendation that "the Government initiates a discussion within the Commission on Narcotic Drugs of alternative ways - including the possibility of legalisation and regulation - to tackle the global drugs dilemma".

However, this is clearly not where the coalition is heading. When it comes to the question of evidence-based drugs policy and public opinion, it would appear that the new British government has carried on precisely where the old one left off.