Perhaps the most radical idea in today's report on police and anti-social behaviour is the call for a "refocusing on what causes harm in communities, rather than what is or is not a 'crime'".

Instead of police resources being driven by what the criminal justice system regards as serious, we should put the effort into what does most damage to society and our quality of life. So where would that lead us? 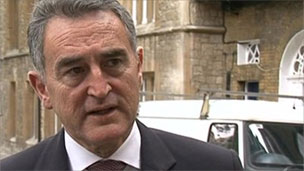 The Chief Inspector of Constabulary, Sir Denis O'Connor believes that, too often, "we sanctify anything that happens to be badged by some legislation as a crime" and dismiss incidents and activities which are "a blight on the lives of millions" but are not defined as criminal offences.

"It may not quite qualify in the rules we have. It certainly may not qualify for the experts. But it qualifies every time for them."

Government already claims to operate a "harm reduction" principle when it comes to its strategy on illegal drugs. The Advisory Council on the Misuse of Drugs has devised a "harm matrix" to assess the relative risks from different substances. In advising ministers on drug classification in England and Wales, the experts consider potential harms to health, families, communities and wider society. (See my previous post on this.)

The Serious Organised Crime Agency (SOCA) describes itself as "an intelligence-led law enforcement agency with harm reduction responsibilities". Its job is to cut not crime, but harm.

This table from an agency report last year shows the complexity of defining the concept when it comes to organised criminal activity. Once again, the multi-faceted nature of harm is considered.

So the idea of harm reduction in a crime context is not entirely new but suggesting it be used to decide the focus of police activity is still, I think, a radical notion.

The Home Office has dabbled in this area with its attempts to compare the 'costs' of different crimes [337KB PDF].

In 2005 they produced research which tried to put a financial value on the consequences from a range of violent offences, although academics recognised that "current estimates of the intangible costs of violent crime, such as pain, grief or suffering experienced by victims are weak".

Nevertheless, the Home Office's table puts a monetary cost on the "physical and emotional impact" of different crimes. The pain and suffering from a common assault, you might notice, is roughly a thirtieth of that from a sexual offence.

Today's report from the HMIC invites us to accept that the physical and emotional effect of ASB is so significant it justifies a far greater police response than some notifiable criminal offences.

In order to free up resources for the "feet on the street" that Sir Denis says are needed to tackle ASB, he has suggested officers be moved from specialist units dealing with hate crime or domestic violence.

This is where the need for a sophisticated crime harm matrix becomes obvious. There is good evidence to suggest that victims of domestic violence, for example, endure enormous psychological trauma in addition to any physical injury. They may never fully recover.

How do we compare that with the harm from kids hanging around the shops drinking cheap cider and swearing at pensioners on their way to the Post Office?

Harm, as SOCA's table and the drugs matrix demonstrate, comes in different forms: direct harm to the victim; harm to the community; harm to the perpetrator from the criminal justice response; harm to the economy - and on and on.

Anti-social behaviour has traditionally been given a low priority because it has been judged that the harm to the individual victim is not acute. Having met many such victims, I would argue this is often incorrect. But it is the harm to wider society that underpins Sir Denis's argument.

"Managing ASB is crucial to sustaining the vitality and confidence of communities. Untreated ASB acts like a magnet for other crime and disorder problems and areas can quite easily tip into a spiral of economic and social decline."

How might we measure this "social harm"? A paper published by the Centre for Crime and Justice Studies in 2005 and entitled Criminal obsessions: why harm matters more than crime [1.5MB PDF] suggested the concept of crime was a "myth" and that "the undue attention given to events which are defined as crimes distracts attention from more serious harm".

This echoes the view of Sir Denis, although I wonder whether his definition of social harm would encompass "notions of autonomy, development and growth, and access to cultural, intellectual and information resources generally available in any given society".

Exploring the idea of "social harm" can quickly become a debate about politics. For instance, is it anti-social behaviour which is the cause of social harm in many deprived areas or a policy of corralling the most challenging and vulnerable individuals and families in poor-quality social housing on isolated estates with few facilities?

The criminal justice system finds the concept of harm too slippery.

Section 143 of the Criminal Justice Act states that "in considering the seriousness of any offence, the court must consider... any harm which the offence caused, was intended to cause or might forseeably have caused". However, when I asked a judge what he thought "harm" meant in that context, he replied, candidly, "No idea".

He told me that the word "harm" is rarely used in court - lawyers prefer to talk about injury or loss. The judiciary is required to consider the social as well of the individual impact of crimes in deciding on sentence, but it is a matter of subjective judgement (that is what judges are paid for, after all) rather than objective science.

And that seems to me to be the weakness in Sir Denis's argument for a "harm reduction" crime strategy. We might agree that ASB has a very significant effect on the quality of life of individuals and communities. But without good evidence of how that harm compares with, say, child abuse or rape or street robbery, how do we know we are putting the feet on the right street?