At school, two children get into an argument and one hits the other giving them a nose bleed. Is that a crime? 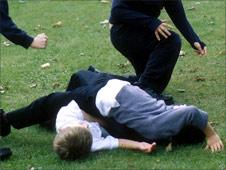 What about this? In a domestic situation, two males are arguing and one of them deliberately smashes the other's prized property. The law would consider it a crime. But what if perpetrator and victim are both 10 years old and the property is a favourite toy?

These questions are considered in the first-ever British Crime Survey (BCS) of 10-15-year-olds [268KB PDF] which, in trying to measure victimhood among children, finds itself examining the nature of crime itself.

Today's research reminds readers that academics wrestled over how to count crime when the first adult BCS was being designed in the early 80s:

So, 20 years ago it was accepted that what is clearly a crime against an adult is not necessarily a crime against a child. One obvious example of this is how a parent is at liberty to smack their son or daughter but might well end up in court if they did the same thing to another adult.

Home Office research into youth offending [256KB PDF] has previously highlighted how children are often involved in "relatively minor transgressions (eg a low value theft from the workplace or a child stealing a small item from school)" which are unlawful but would be unlikely to be considered a matter for the justice system.

Most people would accept that many acts committed by and against children, while technically unlawful, are not really crimes in the way we understand it. The question, though, is which incidents do you include and exclude?

Today's junior edition of the BCS comes up with four ways of looking at children's experience of "crime":

On the basis of talking to 3,661 youngsters, the survey suggests that 10-15-year-olds in England and Wales are victims of anywhere between 400,000 and more than two million crimes.

Using the different definitions, this is how the figures stack up:

Which one you choose to select depends on what you think this new juvenile BCS is attempting to count. Is it a measure of crime or of victimhood? If it is the former, is it assessing crime as defined by the laws of the land or a more subjective understanding of what society regards as right and wrong?

The debate over what defines a crime has raged for hundreds of years. In the mid-18th Century, the judge and jurist Sir William Blackstone defined the concept of "natural law":

The definition works well for acts like murder, rape and theft which are considered crimes pretty much "over all the globe" but it is not always that simple. As the psychologist Philip Feldman wrote in 1993, "the core of criminal law is the same, but the border moves".

One can see this happening: UK law once prohibited adultery and consensual sex between men; a hundred years ago you could buy opium and cocaine over the counter at Harrods. Acts which are perfectly legal here may be serious crimes in other countries and vice versa. One culture's crime is another culture's social norm.

Today's report tries to get closer to a "social norm" definition of crime for British children. It is clear that most "crimes" committed against youngsters are committed by other youngsters or family members that they know. This, it might be suggested, is in contrast to most adults' experience of crime committed against them by strangers.

Here is the basis on which the BCS excludes certain acts which, while technically unlawful, are regarded as acceptable behaviour in normal society.

This gives an adult perspective of crime to the debate, but what about the views of the child? What if a youngster thinks the theft of a low value but much-loved soft toy is a crime? Should that be counted?

This table from today's report offers a range of incidents and how the different definitions apply. 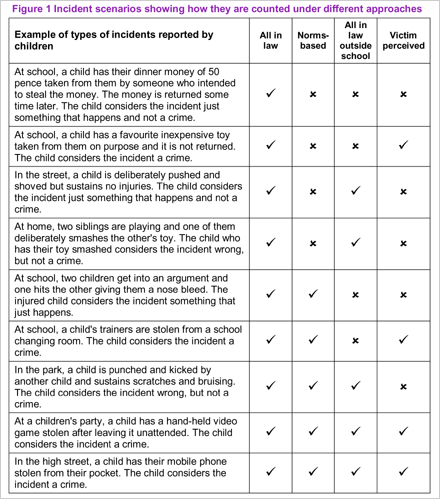 One scenario they could have included is that a child being smacked at home by a parent would be counted as a crime under the "all in law", "all in law outside school" and, potentially, "victim perceived" but not within the "norms-based" definition.

When the Home office was convinced to extend the British Crime Survey down from 16 to 10-year-olds, it was thought the exercise would provide answers to the amount of crime being committed against children in England and Wales. Instead, it appears to have raised many questions about what we actually mean by crime.