No U-turn on human rights

The Conservatives were never going to scrap the Human Rights Act (HRA).

Some in the party might have thought that a manifesto pledge to replace the HRA with a UK Bill of Rights meant they would get rid of those pesky foreign laws which stopped Britain sending terror suspects packing. But if they did, they weren't listening. 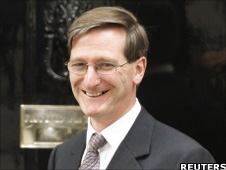 "Although some have argued, and increasingly vociferously, that the solution for the UK in view of these problems is to withdraw from the Convention altogether on the grounds that it is an undesirable and unnecessary fetter of national sovereignty in decision making, I entirely disagree, as does the Conservative Party."

"Such a withdrawal would send a very damaging signal about how the UK viewed the place and promotion of human rights and liberties and would be an encouragement to every tin pot dictator such as Robert Mugabe, who violates them."

How does that fit with the manifesto promise to "replace the Human Rights Act"? Well, the point is that there are two different legal documents involved and some confusion over how they affect Britain.

The European Convention on Human Rights (ECHR) is a binding commitment on all members of the Council of Europe. Drafted in 1950 by a committee led by the Conservative politician, David Maxwell Fyfe, it is that document which ultimately prevents the UK from deporting people who face torture or death.

The human rights lawyer Hugh Tomlinson has pointed out that withdrawing from the ECHR "would probably require the United Kingdom to leave the EU as well". That was not Conservative policy. 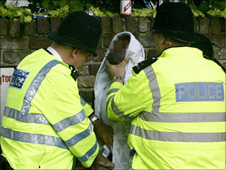 The UK Human Rights Act is a separate and complementary piece of domestic legislation which incorporates most of the ECHR into UK law.

This has meant that British citizens could, as the Labour manifesto put it, "take action in British courts rather than having to wait years to seek redress in Strasbourg".

It does not change individuals rights under the European Convention - it emphasises and clarifies them.

The Conservative promise to "replace" the HRA might have been assumed to mean "scrap" the HRA.

But, in fact, the Conservative policy-makers have always made it clear that the alternative UK Bill of Rights would retain all the ECHR rights and add a few more - in the jargon it would be "Convention plus".

Hugh Tomlinson tells me that, well before the election, the Tories were suggesting it was their intention "to use, in many if not all cases, the same wording as current Convention rights".

Last night, the BBC was told that the coalition government would "establish a commission to investigate the creation of a British Bill of Rights that takes full account of all our obligations under the European convention of human rights and protects and extends traditional British liberties". 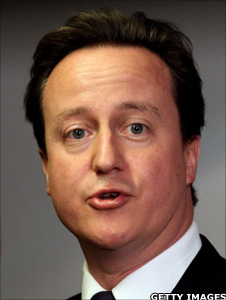 No surprise to those who'd been following the story, but a far cry from what David Cameron was suggesting in 2006 when he described the Human Rights Act as "practically an invitation for terrorists and would-be terrorists to come to Britain".

In that speech he said it was "wrong to undermine public safety, and indeed public confidence in the concept of human rights, by allowing highly dangerous criminals and terrorists to trump the rights of the people of Britain to live in security and peace."

But he also said his new "British Bill of Rights... should protect the fundamental rights set out in the European Convention on Human Rights in clearer and more precise terms".

Former Tory chairman Lord Tebbit spotted the problem straight away - that any British Bill of Rights could be overridden in Strasbourg as long as the UK remains signed up to the European convention.

When it comes to the intractable issue of what to do with terror suspects against whom there is not enough evidence to prosecute, but where security services and the home secretary are convinced they pose a risk to public safety, it is article three of the ECHR which may prevent deportation.

It prohibits torture, and "inhuman or degrading treatment or punishment". There are no exceptions or limitations on this right.

The European Court of Human Rights has emphasised the fundamental nature of article three - that the prohibition is made in "absolute terms... irrespective of a victim's conduct." So it covers innocent old ladies and hardened criminals equally.

In a landmark case brought by the UK government in 1997, the Strasbourg court made it clear that states cannot deport or extradite individuals who might be subjected to torture, inhuman or degrading treatment or punishment, in the recipient state.

Experts are clear that changing the wording and the name of the Human Rights Act in Britain would not and could not indemnify Britain against its obligations under the ECHR.

On the BBC Today programme this morning, Home Secretary Theresa May appeared to suggest to John Humphrys that it was the Liberal Democrats who had forced a change of thinking.

May: "We did say things, that we thought the HRA was not working in certain areas, prior to the election, and we are now discussing with our coalition partners what we will be doing in that area."

May: "No, we are currently discussing with our coalition partners what we will be doing in this area."

In an interview with The Times this morning, Nick Clegg said of the Human Rights Act: "Any government would tamper with it at its peril."

It was not the warning shot as portrayed by some since neither his party, nor their Conservative coalition partners, ever seriously planned to do so.