Over on Reality Check I ask today whether more police = less crime. It is a common assumption, but it turns out to be very hard to prove. 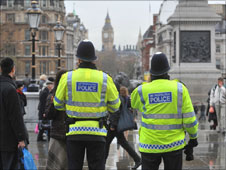 In response to my article, an Oxford University academic has sent me some fascinating bits of research [2.64KB PDF] which try to unravel the truth.

This one neatly sets the stage:

"One of the most surprising empirical results in this literature is the repeated failure to uncover evidence that an increase in the number of police reduces the crime rate. Of the 22 studies surveyed by Samuel Cameron (1988) that attempt to estimate a direct relationship between police and crime using variation across cities, 18 find either no relationship or a positive (ie incorrectly signed) relationship between the two."

The problem is that if crime is rising, law-makers are likely to fund more police. That was the story in Britain from 1960 to 1995 for example. Of course, it doesn't mean that "more police = more crime" but it makes it very difficult to know what impact the extra officers are having.

To answer the question, researchers need a situation where officer numbers increase for a reason other than rising law-breaking. The Levitt paper, published in 1997, claimed to have found a way to "break the simultaneity between police and crime".

The author noticed that police numbers in the United States tend to go up around election time. Politicians in America, as here, believe there are votes in promising more bobbies in the beat.

The conclusion was that, yes, "additional police reduce crime" but later analysis of the paper said that " the results are not statistically significant".

Another experiment [284KB PDF] exploited the increased police presence in Buenos Aires after a terrorist attack on the city's Jewish district in 1994. The researchers found that car theft decreased 75% in the small area around a building with a police officer guarding outside. The paper concludes that "a posted and visible police guard exerts a large, negative, local effect on auto theft and little or no effect outside a narrow area".

There was also a problem in that car thieves might have thought twice about nicking a motor if they feared it might have a bomb in it. Anyway, that piece of research was hardly conclusive.

A similar piece of work was conducted in London after the 7/7 attacks with a much bolder conclusion [536KB PDF]. The research team noted that police deployment increased by over 30% in five London boroughs immediately following the bombings.

"The central finding is that crime fell significantly in these places relative to outer London in the six weeks immediately after the attacks. Furthermore, crime appears to be highly responsive to higher police deployment - we calculate that a 10% increase in police deployment reduces the crime rate by approximately 3%."

The researchers recognise that "the number of potential crime victims might have fallen after the attacks occurred (with fewer people travelling into central London) and this, rather than increased police presence, could have been the key driving factor". But they claim that their results so far "show a significant causal impact of police on crime".

What the research cannot tell us is if vastly more police cuts crime in the longer-term. It is possible that a rational burglar might conduct his break-ins elsewhere for a while if his local patch is swamped with coppers, but return to his home patch later - even if the number of police remains high.

The paper, don't forget, is not arguing that more police catch more criminals. In fact, it shows that a lot more officers identified and recorded a lot less crime.

It would be almost perverse to argue that more police has no effect on crime. But we don't know how much impact they have or how long that impact lasts.

I have also been wondering whether more police = less fear. According to one analysis [180KB PDF], the British Crime Survey suggests that adults who have had some form of personal contact with the police "have, on average, lower levels of confidence in policing".

The research argues that "reductions in confidence may not be due to a greater number of police-public encounters, but because more and more of those encounters are found to be unsatisfactory in some way". Other academics have noted that "those who have had no recent contact with the police are more likely to feel they are doing a good job than those who have."

Again, I don't think there is strong evidence that "more police = more fear", but as the politicians consider how to make big cuts to the criminal justice system, it would be helpful to know whether our assumptions on what works to cut crime are well-placed.