The lamps are going out all over Norfolk. We shall not see jammy dodgers inside Salford Civic Centre again at tea-time.

But restricting council biscuits and street lighting are gestures in what looks certain to be a dark period of rationalisation and savings, or "cuts to jobs and services" as the unions prefer to describe it.

What emerges from the survey is certainty that central government funding - currently about three-fifths of council income - will be slashed when the current spending arrangement comes to an end next year.

But with no hard figures yet, there is inevitable uncertainty as to what it'll mean for front-line staff and services.

Councils say they expect cuts of between 10% and 30%. The survey reflects anxiety across the United Kingdom although results from England present the clearest picture.

Of those English councils who put a figure on expected job losses, the survey identifies 25,000 local authority posts to disappear in the next five years - 10% of the 250,000 people employed by those local authorities.

If that story is reflective of what is likely to happen across England, we might anticipate 180,000 redundancies.

The regions most vulnerable will be those which rely heavily on public sector jobs. In Northern Ireland and the North East of England a third of workers are employed by the state. In the town of Hastings, it is more than 40%.

While some might argue that a smaller public sector is desirable, the next five years are going to bring significant pain to economies and families across the UK.

As for services, around 60 English councils speculate where the axe might fall and, of those, half admit adult social services are vulnerable to cuts.

A third say children's services are at risk. 60% think environmental services (bin collections, for example) may see budgets cut. Around 80% say libraries and arts funding will be hit.

These figures reflect the expectations of only a minority of councils but illustrate a general fear that key services are threatened.

With a general election looming, central government is anxious to avoid blame for damage to local services and makes the point that budgets are already agreed until April 2011.

Indeed, none of the major political parties want to admit the horrible truth just yet, denying voters the opportunity to consider priorities ahead of polling day.

But councils know what is coming. Next year's funding settlement will be significantly lower than the current package and some will argue that it is only prudent to start cutting now. 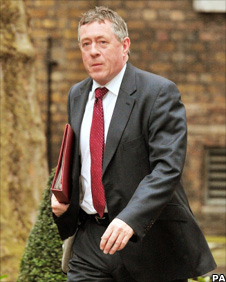 However, the minister responsible for local government in England, John Denham, has made the startling claim that front-line services can be protected and, he argues, "improved, even in tighter times".

He believes that new thinking on how local services are funded and delivered across an area can save billions, by smashing the silo-culture that leads to duplication and waste.

It is a familiar message in straitened times and, while pilots suggest there are significant savings to be made, councils claim they are already the most efficient part of the public sector.

Today Mr Denham offers council leaders 10 top tips on how to save money.

They include reducing council buildings by locating services together and splitting senior management posts with other local authorities or primary care trusts. In Town Halls across the land, change is on the way. Even the Hobnobs are at risk.