Map of the Week: The Rhubarb Triangle

Jubilation today in Yorkshire's Rhubarb Triangle with the news that the region has been granted Protected Designation of Origin (PDO) status by the European Commission.

Yes, Yorkshire Forced Rhubarb, the inconceivably-pink vegetable, traditionally grown and harvested by candlelight in "forcing sheds", has joined the ranks of champagne and Parma ham on a list of Europe's specially-protected food and drink.

"Awarding PDO status to Yorkshire Forced Rhubarb is fantastic news for British food. To the 12 growers left in the rhubarb triangle, a future is now certain. To the hundreds of farmers long since gone this is, in part, recognition of their hard work, dedication and steadfast belief in their product that has kept this industry alive since the early 1950s."

The word "rhubarb" derives from the Latin expression rheum barbarum, the barbarian from the banks of the river Rha (Volga), but the large-leaved Siberian native was a welcome immigrant to the Yorkshire Dales.

Local farmers developed secret methods to produce the tender and sweet version of rhubarb that has won a global fan base. It is thought the closely-guarded techniques involve an upturned bucket.

The exact location of the Rhubarb Triangle is a matter of some debate, as explained at the website of Yorkshire gardeners Sue and Martyn:

"The location of the 'triangle' is sometimes described as the triangular area formed between the three cities of Leeds, Wakefield and Bradford, (the green triangle of the map), other sources of information give the points of the triangle as Leeds, Morley and Wakefield, (the blue triangle on the map). However, the largest area of rhubarb cultivation falls outside of both of these 'triangles. The rhubarb is more accurately the triangular area of land between Morley, Wakefield and Rothwell (the red triangle on the map)." 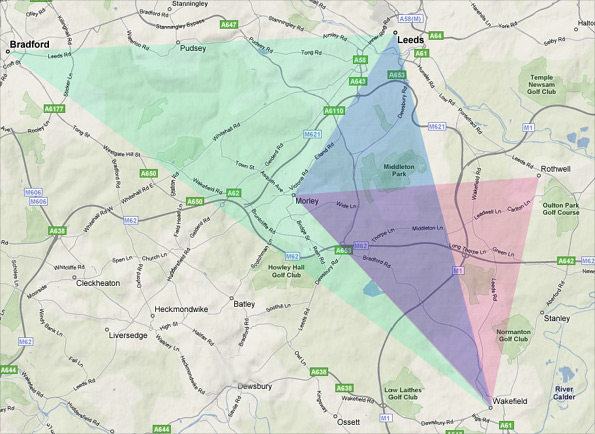 The village of Carlton is apparently the hub of Yorkshire growing, with suggestions recently that it change its name to Rhubarb. The capital city of the Rhubarb Triangles is Wakefield, where an annual rhubarb festival draws visitors from around the country.

West Yorkshire once produced 90% of the world's winter forced rhubarb from the forcing sheds that were common across the fields in the area. "Forcing" means encouraging the plant to shoot early by raising the local temperature - hence the bucket.

Environment Secretary Hilary Benn today praised the enthusiasm and commitment of the rhubarb producers of Yorkshire. "I want to see even more of the best of British produce being protected," he said.

Yorkshire Forced Rhubarb is the 41st British product to be added to the list of legally-protected names which includes Swaledale Cheese, West Country Farmhouse Cheddar and Cornish Sardines.

Protected designation means that all producers must not only be in the designated area, but will be extensively audited, ensuring, it must be hoped, that quality and traditional production methods are maintained. It makes one proud to be British.